I’ve not been keeping up with the blog. To be honest, we’re struggling to keep up with pretty much everything since we got our new place .  I’m not complaining of course, as this is exactly what we wanted.  I am unapologetically making excuses though. 🙂

The weather is warming up, if maybe slower than it normally does, and my blogging time should be increasing.  That’ll mean I will hopefully catch up over the next few months.  Even though it’s still cool enough to be productive in a farm sense, I wanted to kick off my new found blogging fervour today.  You see, today is auspicious, if in a slightly macabre way, as it’s a year today that we almost lost everything in the Pinery Fire .  That was the most terrifying and shitty day of my life, though it could easily have been much shittier, and I want to mark the anniversary here.

I didn’t originally blog about the fire until January this year, a good six weeks after the event. It was all too fresh and raw, and I was a bit cowardly in avoiding the subject.  Writing about it was awful, and until today I’ve not gone back to read that entry.  Again that might be cowardice, but I had zero desire to relive the experience.  However, today I made myself sit through reading what I’d written, which was about as much fun as I was expecting.

November 25th, 2015. This was when the fire first hit our place. The fire storm had been through, but these were the first big flames. 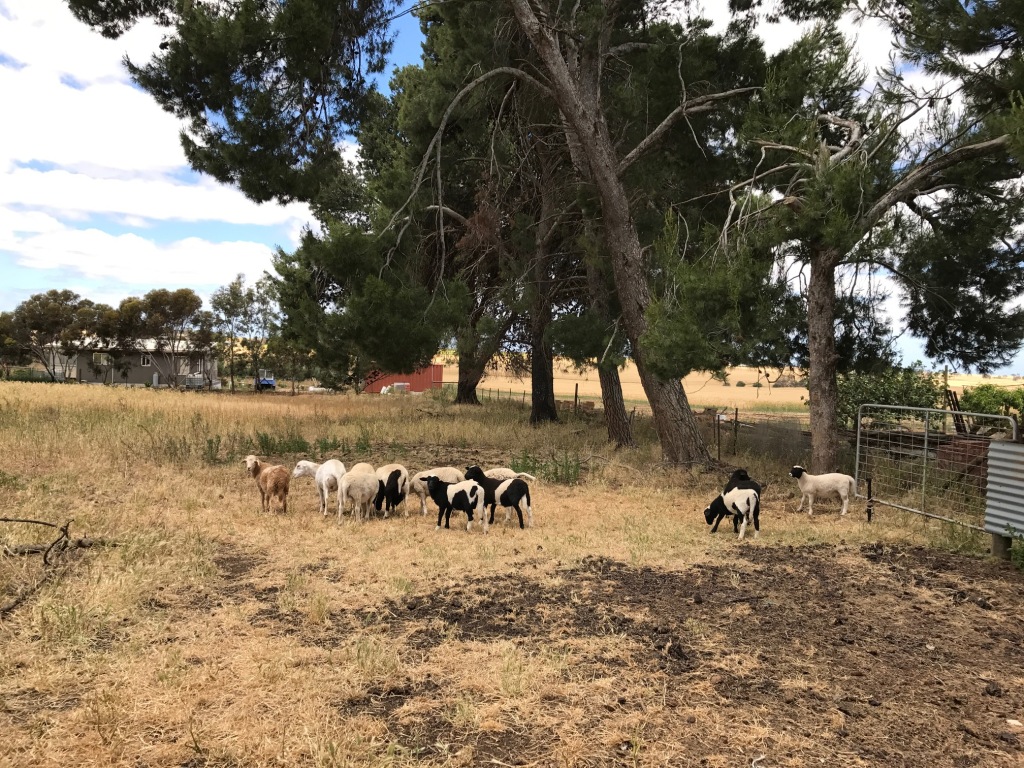 November 25th, 2016. This is the same view back to where the fire came through. Looks a little different, yes?

Reading that original blog entry really highlighted to me the difference in the weather and conditions from last year to this.  This year has been insanely wet, and it hasn’t been hot at all.  Hell, this morning I was actively cold and realised that there have been maybe two days this season that I’ve not had to wear a jacket.

The rain has been crazy.  I checked the Bureau of Meteorology, and it tells me that the average rainfall in Roseworthy to November is 446mm, and to this day last year we’d had 355mm.  This year we’ve had 601mm! 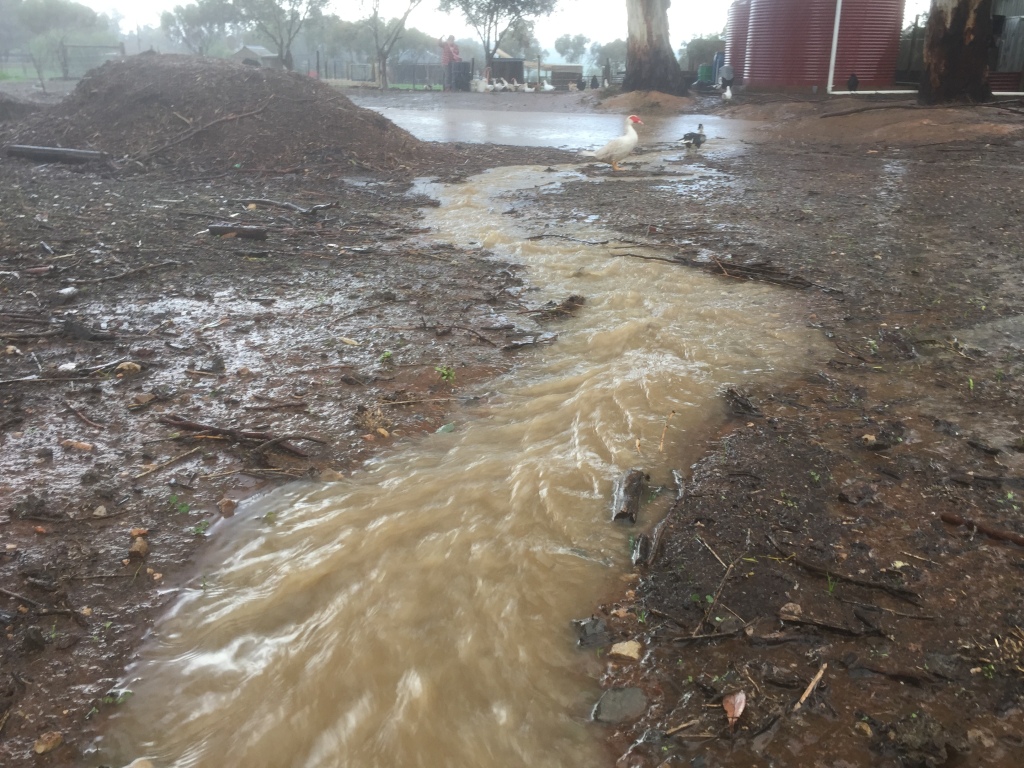 This is the flow of water from the road into our property. It’s a freaking creek!

This is what we affectionately call “The Duck Pond”. It appeared this year in early June, and right now in late November it’s almost gone. That’s six full months of a body of water where we’ve never had one before.

That rainfall has felt awesome, as has the lack of scorching days. Our share farmer at our other place said that this is the first year he remembers where all of the crops have completely ripened in their own time.  Normally there’s been a hot spell that brings them on, but this year they’ve been free to ripen without pressure.  Apparently that leads to amazing yields, and I think they’re forecasting some record breakers this year.  The problem is, however, that many of those crops are still in the ground.

This time last year the harvesting was mostly done, especially around us.  All that was left on the ground was stubble.  This year, the harvest around us started about a week ago, though hay-cutting started about a month ago.  The hay is bailed, but much of it is still sitting in paddocks.  Many more paddocks are waiting for harvesting with potentially record-breaking crops on them. The one thought that keeps cycling through my mind is just how much fuel is in a crop with record-breaking yields.

The farmers know their jobs, and they’re all out working like only farmers can.  I’ll just be much more comfortable when the crops are off.

The other problem with the unseasonably cool and wet weather is that it took away some of the urgency.  It’s tough to think about planning for fires when it’s been raining for six months.  We’re not unprepared, but we’re not as prepared as I wanted.  That should change over the next few weeks.

We have extra tanks, and we currently have around 30,000 litres of water stored and dedicated to fire fighting.  That’s 10 to 15 CFS trucks worth of water, and it should help a lot.  We’ll shortly have sprinklers on the roof, with a dedicated pump and 5,000 litre tank of water.  This will do nothing but sprinkle the roof of the house during a fire, and that 5,000 litres should last for a long time.

At the same time, we’ll shortly have a second fire-fighting pump attached to two tanks with a combined storage of a little over 25,000 litres.  That will be positioned to the west of the house, which is the direction from which most fires will come.  From there we should be able to protect the house quite well, and maybe even that entire boundary.

We’re also doing little things like putting a spare 2,000 litre tank, with a CFS-approved fitting, somewhere that’s accessible to the fire trucks.  We’re even running the grey water overflow hose from the septic down along the fence line to the west, just to keep that area moist. Every bit helps, even if it’s gross grey water. 🙂

You can still see the scars from the fires.  John’s new house had the kitchen delivered yesterday and he might be in before Christmas.  Of the other houses that were lost near us, one is demolished and a new foundation is down, but another is still just a shell.  The gum trees are all bouncing back like they do, but our giant mulberry tree is still unhappy.

Even with these daily visible reminders, it wouldn’t be hard to put the fire to the very back of your mind. Most of the countryside is back to normal, most of the fences are back up, and the crops are looking amazing.  You might not be able to forget it completely, but you could lock it away somewhere and ignore it.  As tempting as that it is, it’d be a mistake.  This is exactly why I made myself read my blog entry about the fire today.  This is exactly why I’m writing about it again now.  This is exactly why we’ll pull our fingers out and increase our fire preparedness over the next few weeks.

Our weather is changing, with more and more extreme weather events (we’ve had both fire and floods in the last 12 months, with an actual tornado touching down 15 minutes from our other place a couple of months ago).  The seasons are changing, and while that has benefited the local broad-acre farmers over the past year, there’s no telling what’ll happen next year.  We will definitively get more fires, especially if we end up with later harvests and more fuel on the ground going into summer.  This is one of those adapt-or-die situations I think, and I, for one, plan to adapt. November 25th, 2015. This is just as the wind changed and the fire storm started to roll towards us.

November 25th, 2016. You can see the two trees to the right of the picture, and then match them with the same two trees in the previous picture. It’s gives an idea of what rolled over us.