That doesn’t mean you can rest on your laurels though. It also doesn’t mean that I won’t be bugging you all day every day when I’m gone.

January 2014 was hot. No, that’s an understatement. January 2014 was ridiculously hot! There wasn’t a single weekend that we could go out during the daylight hours and do much that was productive. The entire month was taken up with keeping plants and animals alive, and being frustrated that we couldn’t get out and get things done. Early in the month we did go on our first fishing foray. We like seafood, and according to our self-sufficiency philosophy we should either be catching or growing it ourselves. With that in mind, we thought we’d have a shot at fishing. We have some friends with a nice-sized boat, and we spent a weekend on the Yorke Peninsula.

The morning of our first fishing foray and I did this sharpening my knife.

It was a good weekend, though we didn’t really catch much that was edible. We did catch a fair few fish though, and it showed us the potential. Personally, I think I’ll give aquaponics a go before I buy a boat, as it has the added benefit of helping me grow plants. However, I think we’ll become regular fisher-people inside the next few years. 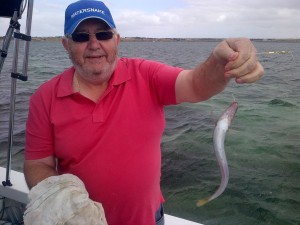 It was too small, but was still exciting to catch.

The stock animals fared pretty well over January, though we went to great lengths to keep them cool. 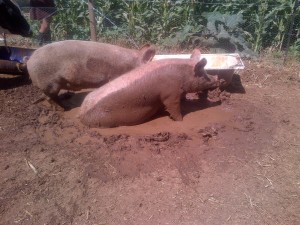 This is one way to stay cool in Summer…

… and this is another. 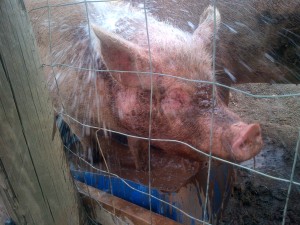 It’s just like a shower, only nobody really ends up any cleaner.

Steak, our Friesian steer, and the babies were all getting bigger too.

Steak was getting bigger. 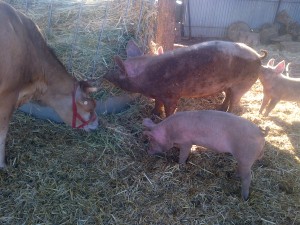 The piglets were growing.

We’d changed our veggie garden a little, based on the heat from last year. We reduced the number of things we grew, limiting it to the plants we knew would do well – tomatoes, corn, carrots, pumpkin, zucchini, squash. We completely avoided leafy greens or anything else that takes a battering in the heat. That meant that The Patch was only 2/3 full, as compared to completely full at this time last year, but we had a much easier time keeping it all alive. Not to mention the fact that we would have used a lot less water this year too. 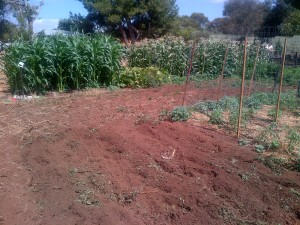 Empty space because many of the things we’d like to grow can’t handle Summer out here. 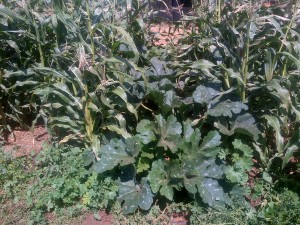 The best carrots you’ll ever taste. EVER!

I think I’ll change it a little next year too. For one, I’ll get the tomatoes and corn in a little earlier. I think I’ll also grow more of the limited number of veggies. That is, rather than one bed of corn and one of tomatoes, I’ll maybe go one-and-a-half of each. That’ll make the rotation a little more tricky, and the irrigation may have to be tailored a bit, but I think it’ll work well.

We tried using sheep panel fencing to grow the tomatoes, rather than stakes, as it meant less work. I normally spend hours every weekend tying up the tomatoes and nipping off the lateral shoots. This year we just grew them up rows of fencing panels, which meant no tying, and I let the laterals go. However, they still need some tending, and we weren’t able to do that due to both the heat and my work schedule. The results were still good, but they could have been better. I think next year we’ll nail it.

About the only productive veggie thing we did was harvest. I’m not complaining about that part though… 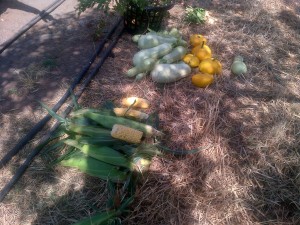 January was pretty much us treading water, waiting to get the opportunity to get out and be productive. We’ve been here 2 years now, and while we’ve come much farther much faster than we thought possible, there are still things that need to be built or tweaked. The lesson that our 3 Januarys here have taught us is that we should plan to do nothing much outside, and basically write the entire month off.

Effy carrying two half-tonne rolls of hay for us. Like a boss! 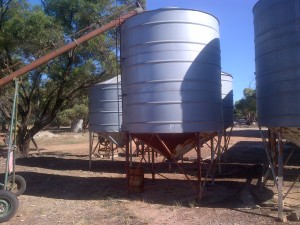 This is what we use to store our grain…

… and this is what we use to get the grain out.