The problem we’re going to face now that we sell at a market is we may run out of pigs.  Scratch that.  We will definitely run out of pigs.  While having that kind of demand is a nice problem to have, it’s still a very real issue for a fledgling business trying to establish a customer-base.  At the same time, we have a gap in our production as the last couple of sows we wanted to get pregnant ended up not taking.  We’re also looking at transitioning to an all heritage-breed breeding program, which is just one other complexity to throw into that already complex mix.

What we’ve done to help remedy all of those things is buy in some pigs.  We have bought in 9 Large Blacks from a registered herd near us that is being disbanded.  With one exception, these are all small pigs that we’ll raise.  Three of those are gilts and will become part of our breeding program, and five are barrows that will become bacon.  The 9th, which is the exception I mentioned, is an older sow that we’ll breed from in the short-term.  She probably would’ve been chopped had we not taken her, and she still has a number of litters in her.  I’m keen to see how she goes.

The other thing we’ve done is buy an entire litter of Berkshires.  A registered breeder not that far from us advertised them the day after they were born, with a pick-up date of 5 weeks later at weaning.  I rang and bought the lot.  He’ll castrate the boys, and we’ll use at least 3 of the girls in our breeding program.

All of these purchases will help bridge our gap in production, while still being ethically raised and free-ranged pork, and at the same time will transition us to an entirely heritage-breed farm.  We still have to find a suitable boar, and we’re not exactly sure what breed to use.  What we’ll probably do is have the vet show us how to AI, buy in some semen to try the various combinations, and use that to help us decide.  In the meantime, poor old Boris’ days may be a little numbered.

The related problem is sourcing beef and lambs that have been raised the way we’d raise them.  We don’t currently have the space to do them ourselves, though we can keep a handful of lambs in our front yard to help keep the grass and weeds down.  The beef is actually relatively easy, as we have two trusted sources for that – one is a mate who runs a herd of 650 black angus in the south-east of the state, and one is our neighbour who feeds on 10 to 15 at a time on his scrub lot right near home.  Both raise proper free-ranged, grass-fed beef, and the product from both is amazing.

Lambs are the more pressing problem.  We were lucky to find a guy who breeds and raises them organically, and we got a handful from him.  We’ll have to stay on the lookout for more, and like I said, we actually have scope to keep them at home for a while, with the added benefit that they’re eating down weeds and grass I don’t have time to deal with.  Also gum leaves.  The silly animals love to munch on gum leaves.

Our best-case end-state will be to have enough land to do it all ourselves.  We could expand the pig production and have a small breeding flock of sheep.  I’d like enough land to feed-on our own cattle, but the two sources we have are the real-deal so that’s the lowest on my priority list.  Even with that, I don’t think we’ll ever breed cattle.  Breeding pigs is challenging, but we have the infrastructure and know-how, and it’s kind of fun.  Breeding sheep is pretty easy, and sheep are simple to handle and manage.  Cattle, and more specifically bulls, are a whole other kettle of very large fish.  I think we’ll stick to buying them from people we know and trust, and if we have room we’ll just buy them as weaners and feed them on ourselves.  Trying to manage a bull is probably more than we want to take on. 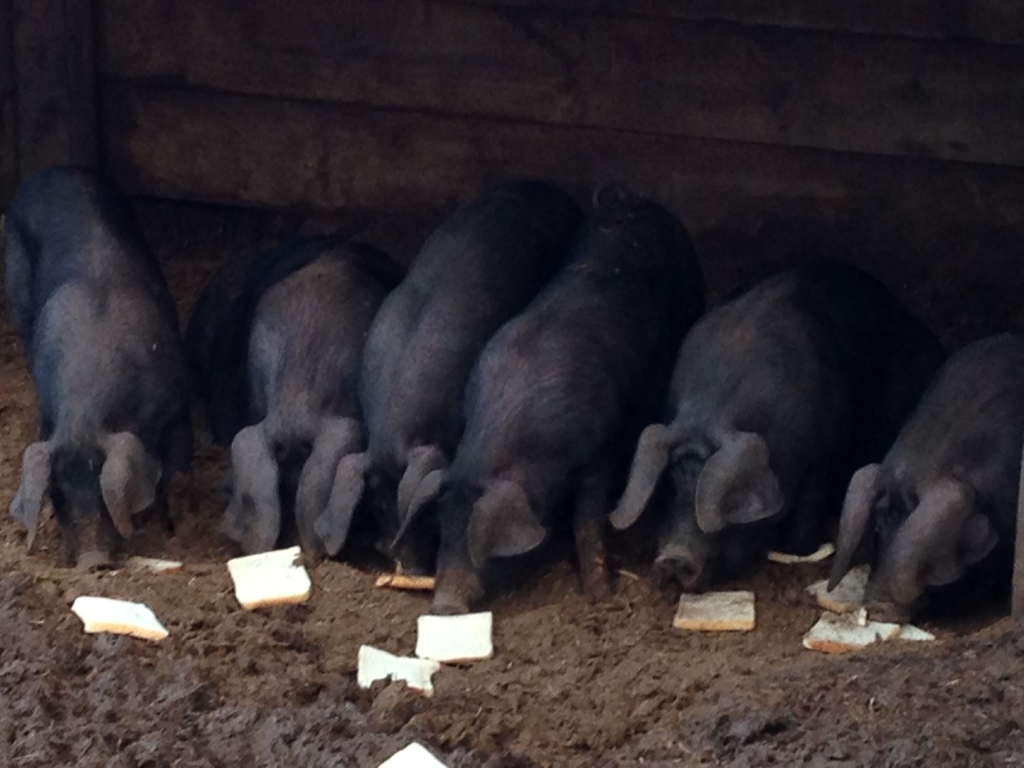 The true start of our all heritage-breed breeding program!