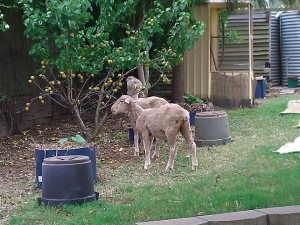 February was a huge month for cleaning up. We were able to rip up more of the crappy plants from the back (seriously, why do South Australians insist on planting palms?!).  We also cleaned up and thinned more of the gum trees. 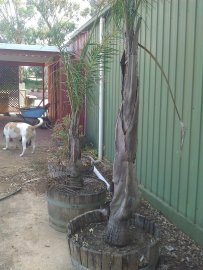 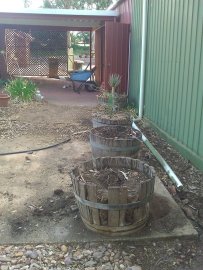 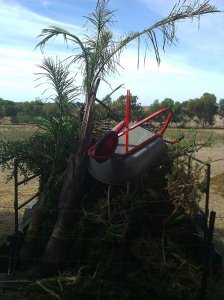 How all palms in S.A. should end up – as bonfire material.

Cutting back the gums, and in some cases taking out the smaller ones altogether, seems a little harsh. However, it really was necessary. There were smaller gums planted in random spots that got in the way of our productive fruit area.  We left the ones that were up next to the fences (if they were healthy), or that wouldn’t shade our fruit trees. Also, the flowering gums planted around the border are quite scrubby, with multiple long straight limbs. They end up growing over everything, covering paths and in many cases leaning on the fences.  They were in dire need of trimming.

Even the big gums needed attention, as there were some quite thick limbs casting shade where it wasn’t wanted, or at risk of dropping at the wrong time on the wrong things (e.g. sheds).

This process netted us quite a bit of fire wood, along with some scrubby stuff for outdoor fires, some thinner stuff we mulched, and anything left over went on our bonfire pile.

We would have moved several tonnes of wood this month, and in some cases moved it twice as we really hadn’t planned our wood pile situation well. We also checked out the price of wood on a trip to a landscape yard, and it ranged from $350 to $450 a tonne! While we haven’t cut any of our trees specifically for wood, the fringe benefit of having fire wood we don’t have to pay for is awesome.

I think it was also around this time that we decided to hire a cherry picker and spend a day or two doing the tree maintenance properly. For one, February is WAY too hot to be out there cutting and lugging wood. Mostly, however, it’s too dangerous to be perched in a tree or hanging off of a ladder with a heavy chainsaw. I really did scare myself a couple of times…

This was also the month when we got our first goats.  Linhda has a friend who, as chance would have it, lives all of 2 kilometres down the road and breeds meat (Boer) goats. We ordered two from him, which he kindly delivered. 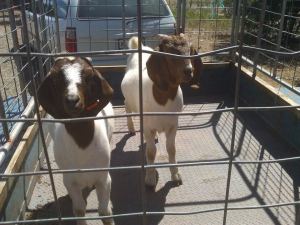 It took dad and me nearly a full weekend to fix up the fence in the back paddock in readiness of the goats. We followed this with about a day’s worth or work doing the same to the fences at the front of the house.  We had to make them goat-proof, which meant tying up any dodgy wire, pinning down stretches they might try and squeeze under, and banging in any droppers that were holding wire too far off the ground. At the same time, we took the opportunity to start trimming back the flowering gums along the border, as some of them were hurting the fence. 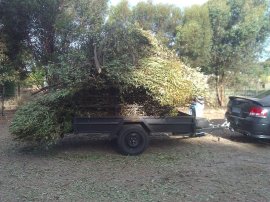 One of our many loads of wood. 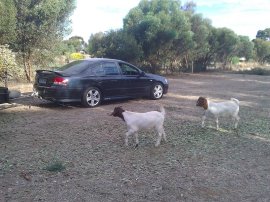 The goats checking out the action. 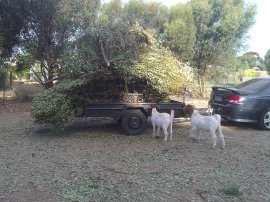 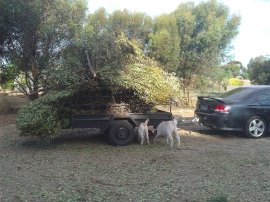 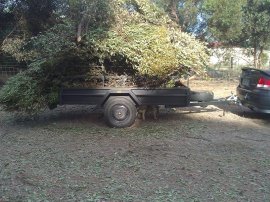 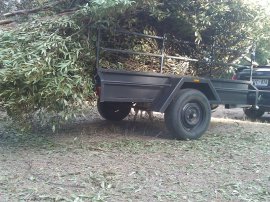 And through! Apparently that’s easier than going around.

My brother visited right after we got the goats too. 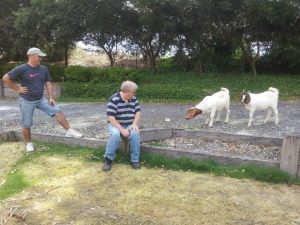 Dave comes to visit. To visit us, not the goats.

We ran into poultry difficulties, mainly due to the volume of poultry we had.  We now had egg birds, breeding ducks for meat, and meat chooks, and we had to house them all.  We did some shuffling to accommodate the numbers. At the time I put this down to a lack of planning, but now I’m not so sure.  It’s a year on and we still run into these difficulties sometimes.

Our poultry problems were mostly alleviated by taking the meat chooks to “the other farm”. This is a different “the other farm” <link> than the one we take the sheep and goats to. We were equally lucky to find a poultry processing place about 5 minutes further on from the country butcher abattoir. The place is a little confronting, as their “kill room” is next to the loading dock where all of their customers first arrive. Still, part of this process is reconnecting with where our food comes from and I see this as an integral part of that. Also, it lets me know definitively that the birds are killed correctly.

Meat chooks all grown up! 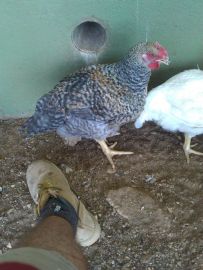 We dropped off 23 chickens, and got back 46kg of dressed meat. That’s math even I can do, with an average of 2kg per bird. We estimated that it cost something like $6 a bird from start to finish, and we were thrilled. That’s a very affordable outcome, the birds were big, and we knew they’d been raised correctly with green feed, exercise, time to grow, and no mistreatment. We’ve improved this process even more, and produce birds twice the size for the same cost.  I’ll explain that more in the Stock Animals section.

I’ve never been big on doing entire roast chickens at home, mostly because they never turn out anything like the rotisserie birds you can buy. However, we were determined to have entire roast birds, so I went out and bought a rotisserie for my BBQ. None of us had ever done this before, and we weren’t quite ready for the results. Our first try was, hands-down, no exaggeration, the best chicken we’d ever eaten. It’s either a very forgiving way to cook chicken, or I’m some kind of savant roast chook dude, because every one we’ve done since has been as good or better. 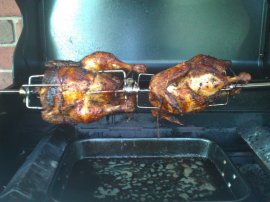 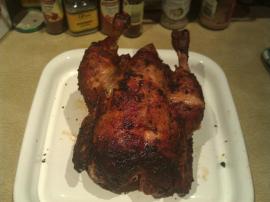 Our final poultry development was clucky ducks! All three Muscovies (Muscovites?) was clucky and sitting on eggs.  There weren’t a heap of eggs, but they were definitely nesting on them and protective of them. WooHoo!

I had planned our veggie patch in some detail. In fact, seeing as we’d had some months before we moved in where I could do nothing on the place, I’d spent an almost obsessive amount of time planning the veggie patch, including the dimensions, rotations system, irrigation, etc.  In preparation for that, I wanted to have some manure delivered. I called the manure man (I actually think that’s his business name) and organised to have their largest load of chook poop delivered.

Apparently chicken shit is big business.  There are huge commercially run chicken farms all over our area, with a 6 week turn around in chooks.  That means a huge turn over in the manure, and this guy was working 7 days a week trying to keep up.

I may have overestimated just how much chook poop we needed.  Their biggest load was 28 cubic metres, which is somewhere between 10 and 12 tonnes.  At the time that seemed reasonable, but we were later to find that it was a bit too much… 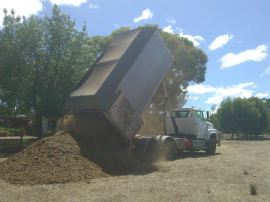 The pile of crap starting… 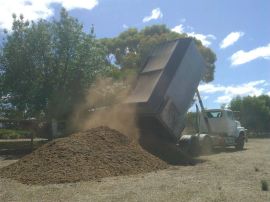 The pile of crap growing… 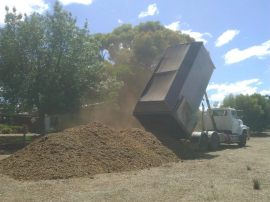 The pile of crap almost done… 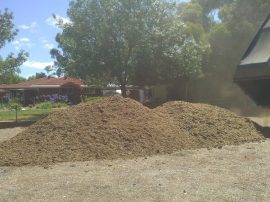 The pile of crap unloaded!

February was also a bit of a sad month. We lost one of our egg chooks. We’d bought Isa Browns in the suburbs, and they really are awesome. They lay almost daily, the eggs are huge, and they’re just lovely birds. The thing with these newer breeds of birds is they’re not as long-lived as the old-school ladies. Back in the day they’d live a few years beyond their productive life. Nowadays, because they’re so prolific, they die a bit younger. From a purely production point-of-view, that’s probably ideal, but it’s still sad to lose them.  The lady we lost was named “Henrick”, and she was Linhda’s.

The really sad thing is that Peyton’s cat, Mal, was hit by a car. I’m not a fan of outside cats at all, but Mal had some issues that meant he’d become a shed cat.  Early in the month dad found Mal on the side of the road, and he became the first pet in the Atherton pet cemetery. He was more than a little crazy, but Mal really was a sweet cat and we all loved him. He is still missed. 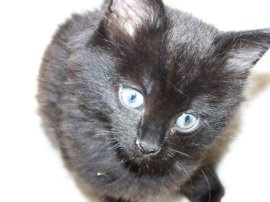 Mal as a kitten. 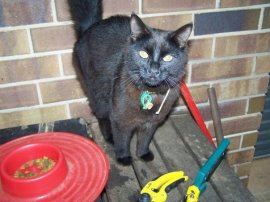 Mal grown up. So pretty!