We captured our own bee hive back in September, 2012, and despite having them for around 2½ years, them swarming twice, and me getting stung a lot, we’ve never collected honey. We really didn’t know what we were doing, and the bees always seemed the lowest priority in the long, long list of farm jobs we never seem to get through.

We did make a little progress back in the middle of last year when a very nice amateur apiarist came out to give us some advice. We found that our honey super looked to be full of canola honey, which is darker and seems denser. It apparently crystalizes really easily, and many apiarists seal those frames away and bring them out over winter to feed the hive. He helped us fix up the hive, grabbed a swarm as our hive had coincidentally split the day before he visited, and advised us to put a second honey super on. He also told us to paint it, as the wood was warping.

Fast forward several months and we’d still not maintained the hive the way we’d wanted. However, we were getting married at the end of April, and wanted to use our own honey as wedding favours (there’s a funny French word for that, but I’m buggered if I can remember it). With the wedding pushing the job up the priority list, I got serious.

First of all, I bought a sexy suit. In my defence, I had actually tried to buy one some months ago, but everywhere was out of stock. This time I found a great apiarist-supply place, and they hooked me up. 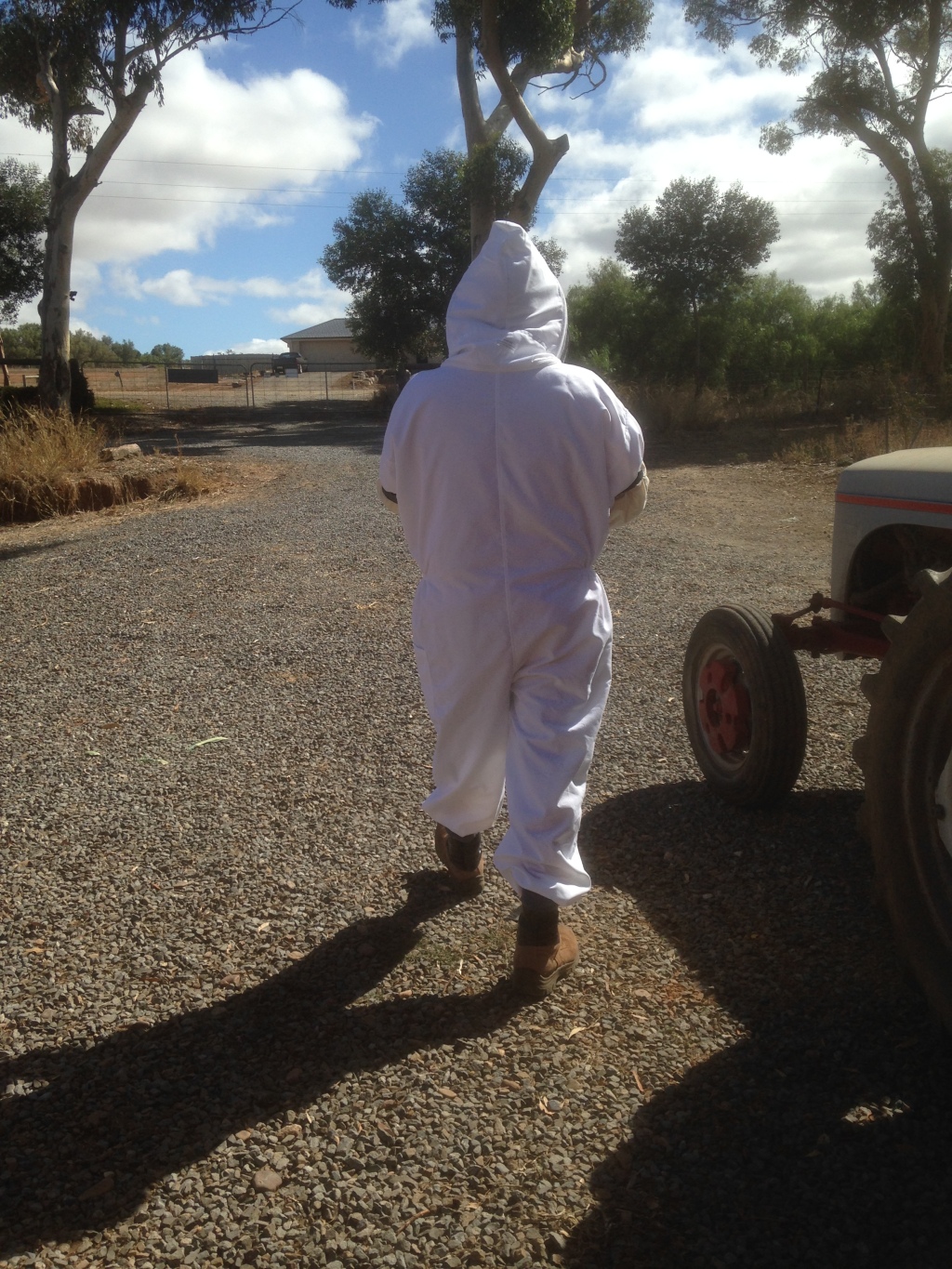 Does my butt look big in this bee suit? 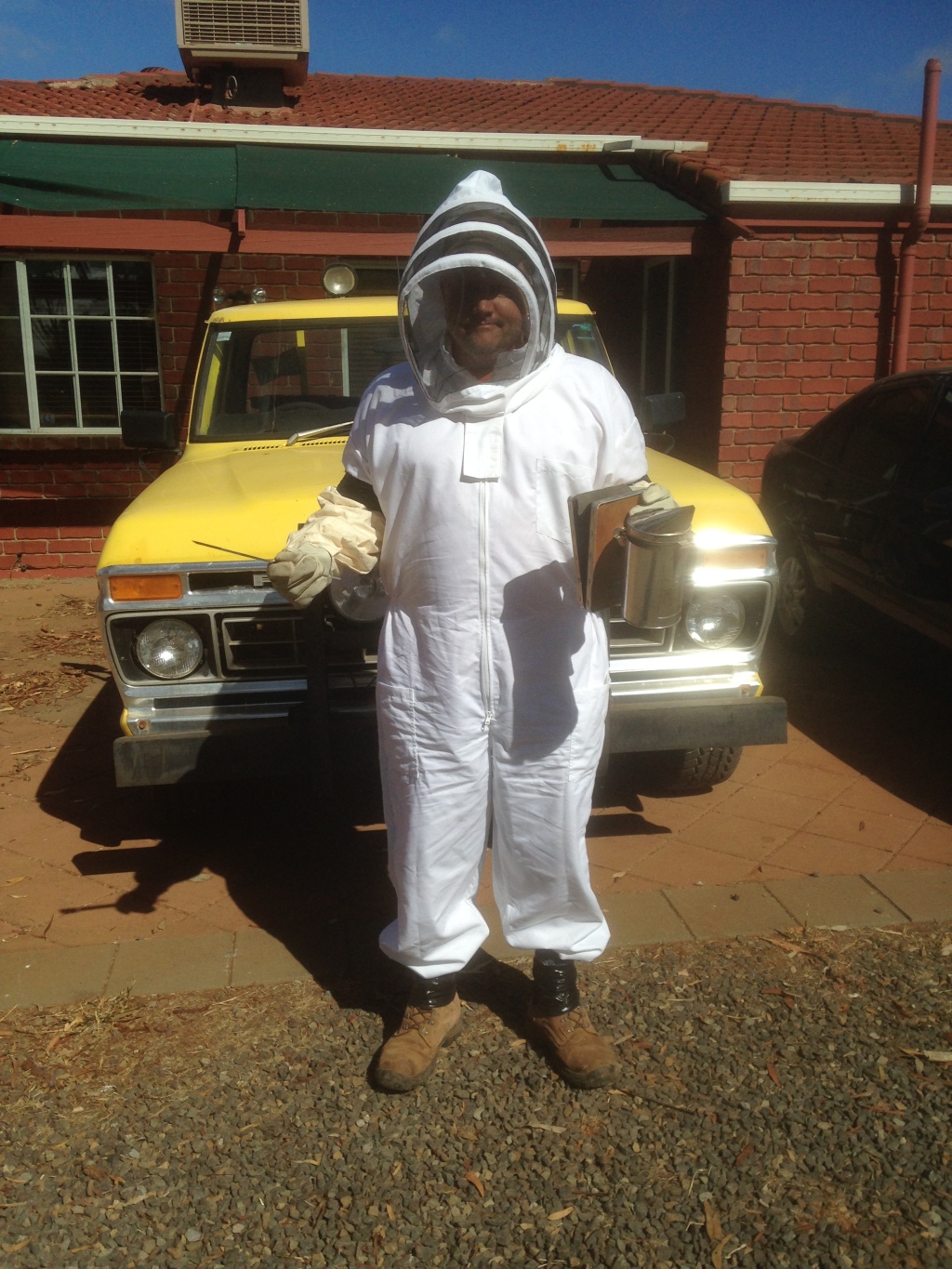 Note the tape around the tops of the boots. Not my first time…

I then went out, sealed up the hive to keep the little buggers away from me, and gave the hive a few coats of a good external paint. In reality, I probably could’ve just let them fly around – they only try and hurt me when I’m really messing inside their hive. 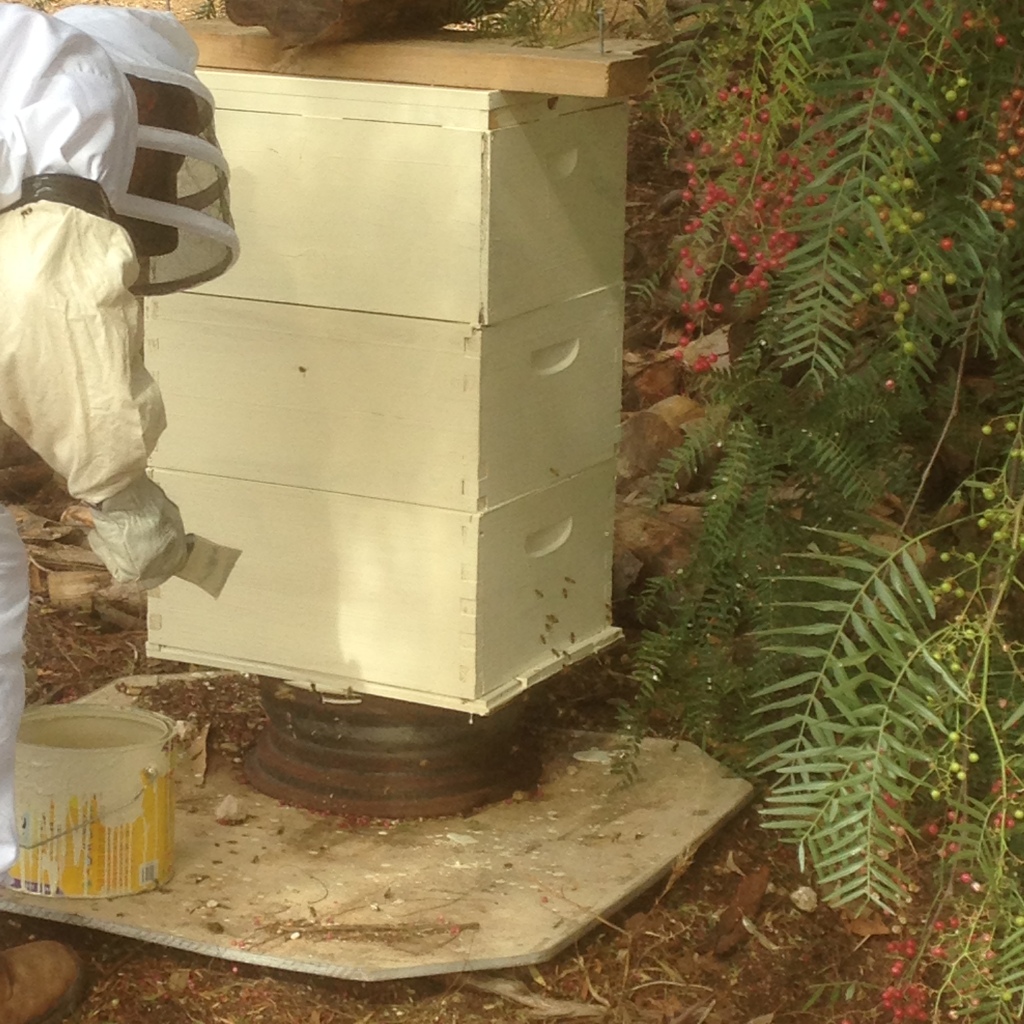 It actually turned out quite well, and the hive looks much nicer now.

I couldn’t help myself, and had to mess around inside the hive a little bit. 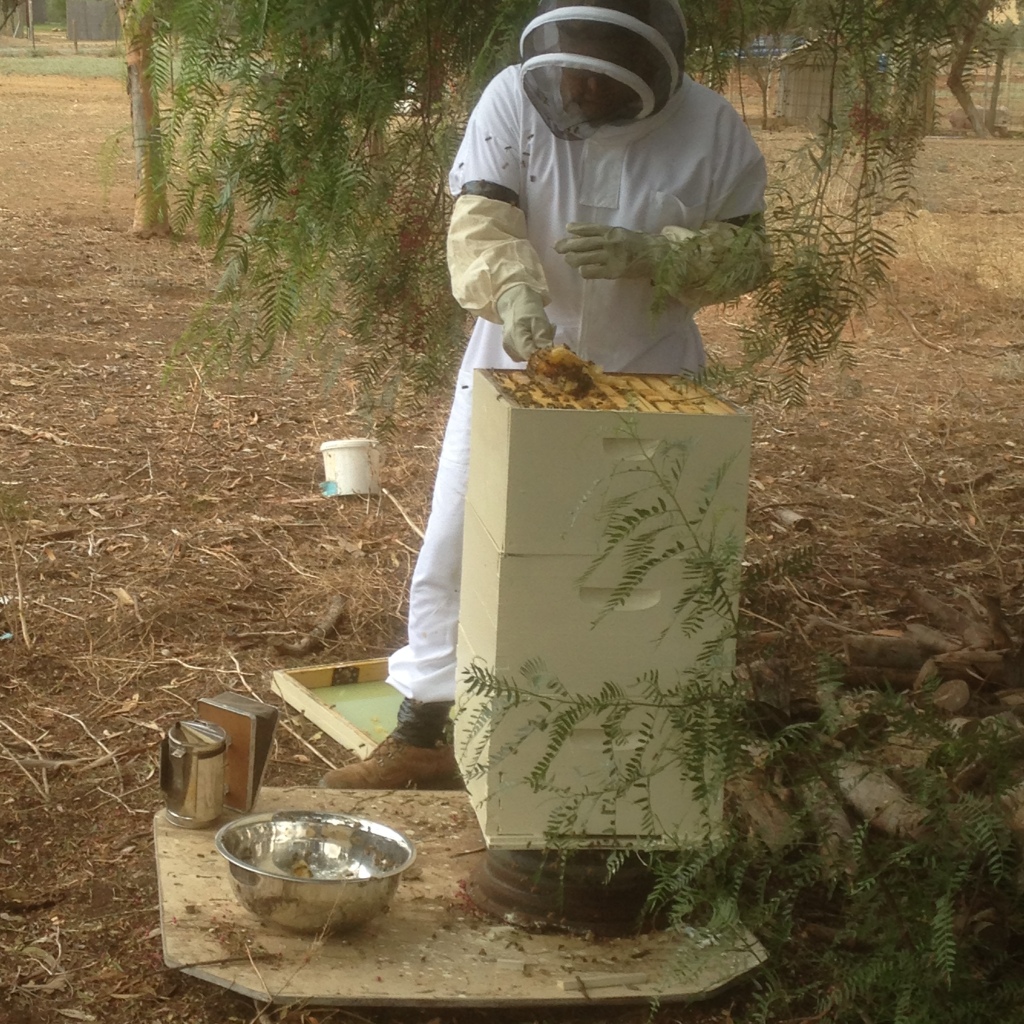 Cleaning out the comb that was overflowing the frames.

I did clean it up a bit, as there was some comb stuck to the lid. For the most part I just painted the hive and left them alone.

I then left them alone for a few weeks. I needed to find a weekend where we had the time to devote to trying to extract the honey. I’d read that it was quite easy, and we watched dozens of YouTube videos, but I was still worried. We were lucky enough to be able to hire an extractor over the Easter long weekend, where we effectively got the machine for 4 days but only had to pay for 1 day’s hire. At the same time we bought a legit honey bucket with gate (that’s what they call taps in the honey business – the honey man was weirdly firm about that).

The extractor set up to flow into our honey bucket. Linhda did make me filter it through a colander with cloth over it. She apparently doesn’t like bee bits in her honey.

From the two honey supers I figured that I’d maybe extract from 15 frames. There would be some that weren’t very full, and I didn’t want to leave them short coming up to the colder months. As it turns out, I only extracted from six. There were four or five that had the canola honey in them. Those I sealed away in a plastic container down the back of our big shed, and I’ll bring them out over winter. There was about the same number that were only half-full, so I left them alone. The remaining half-dozen were very, very full though, with the comb sticking above the level of the frames. That was good too, as it makes taking the capping off a bit easier. 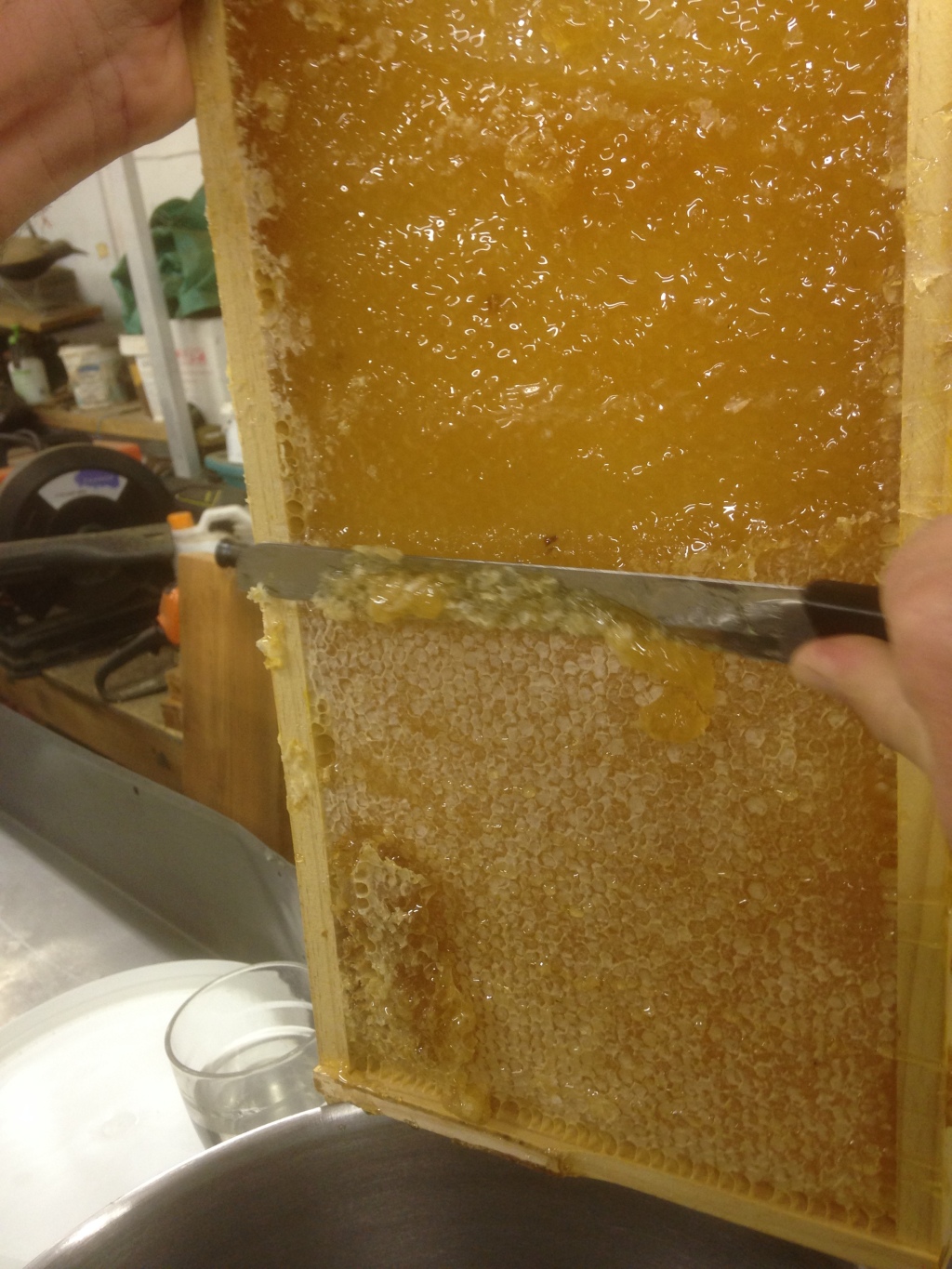 Uncapping the comb. How beautiful does that look?!

You can see how the comb was so full it was sitting up proud of the frame’s edge.

Again, I’d read and watched lots about taking the capping off. The best way seems to be to use one of the special electrically-heated knives, but they’re something like $300. I figured that we’d try our own methods first, and so went with the old bread knife left in hot water. It did a pretty good job.

After that you put them in the extractor, spin half the honey from one side, flip them, spin the honey out of that side, and then flip them back to the original side to finish them off. You don’t want to just spin one side completely out and flip them, as the weight of the honey can damage the foundation. 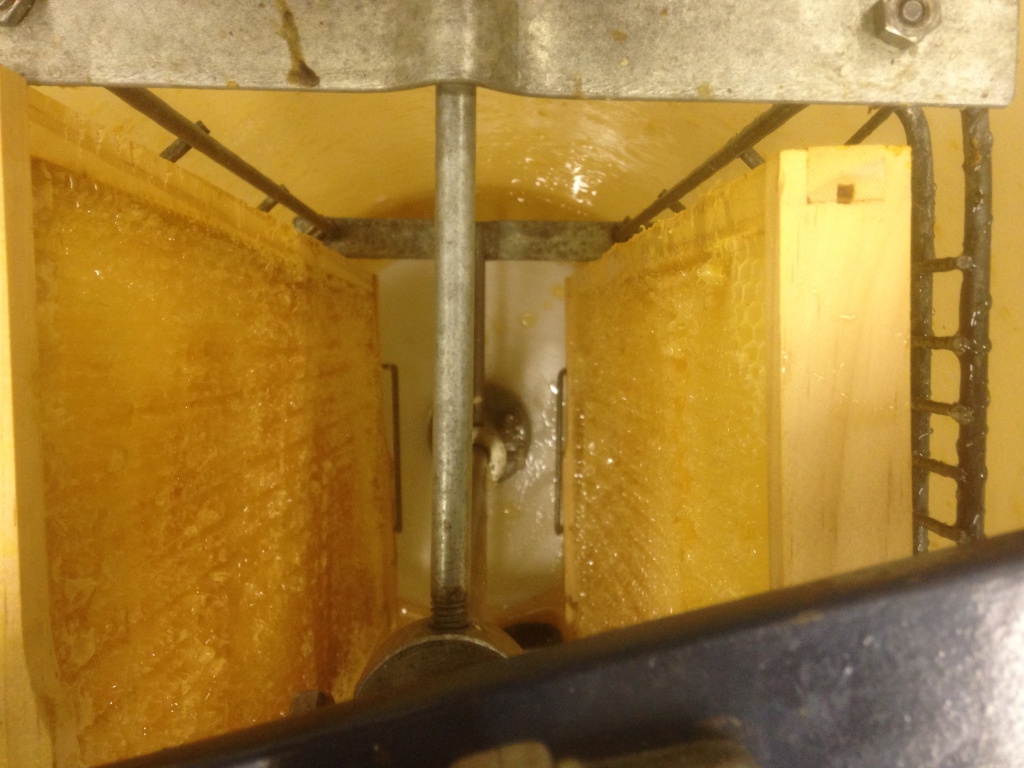 Staring the spinning. At first we didn’t think we were getting much.

It didn’t take long to see the results of our labour.

A sea of honey!

We ended up with 9kg of honey from only six frames!!!!!! Using that as a basis, our fully laden hive could potentially supply 30kg of honey per year. That’s freaking insane!

I also learned that you can put the emptied frames back out near the hive and the bees will clean them up. There’s always honey on the frames and some left in the comb, and the bees clean it up much more efficiently than I ever could. 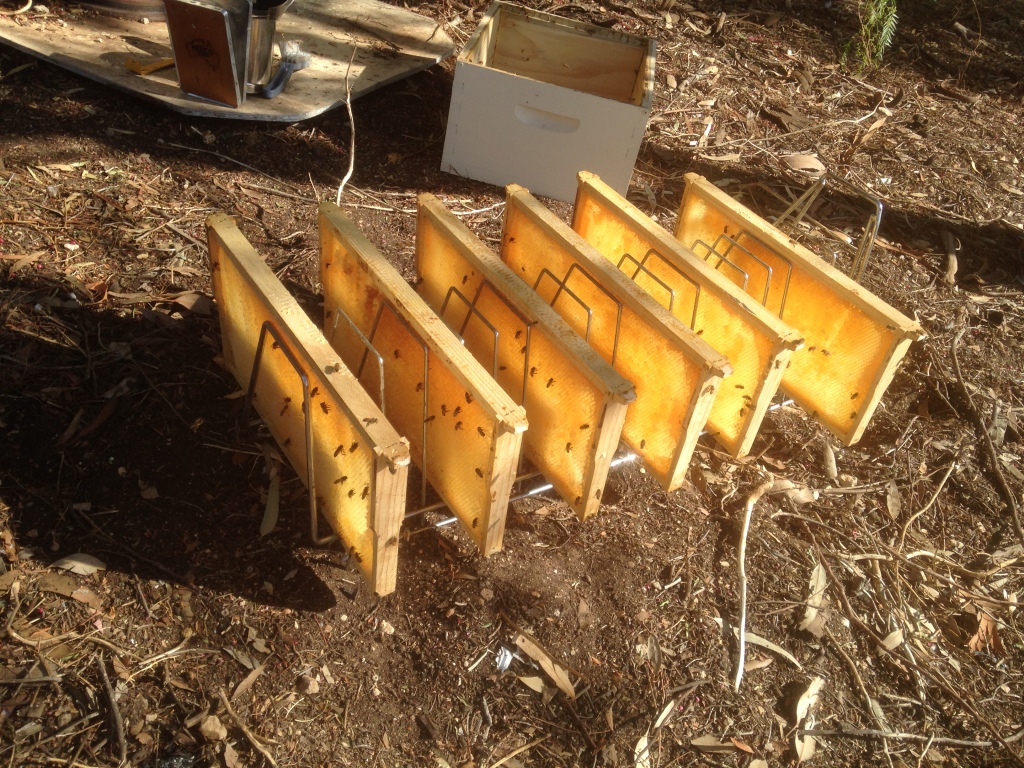 Letting the industrious bees industriously clean up so I don’t have to.

The suit worked well, with one small lesson learned. I normally wear a cap under it, but feel like the cap brim pulls the back of the hood against my neck. That made it feel like the bees could land there and sting me. With that in mind, I used a hat with a full brim. However, that kept the face nettings against my face a bit, and I got a sting under my chin. Twice now I’ve taken multiple stings, and it didn’t really slow me down. This single sting, on the other hand, hit me somewhere sensitive, because my entire face swelled up. Seriously, my forehead swelled. That was slightly scary.

It was all worth it though, as the wedding favours were beautiful.

The wedding favours were gorgeous!

My brother got us an amazing hexagonal bee hive as a wedding present, which I can’t find a picture of for some reason. I expect our hive will split again in Spring and this time I want to catch the swarm. If we can, I’ll use the new hive. Fingers crossed…