Both Gemma and Linhda share a birthday near the start of September, and we decided to have a combined party with a spit-pig.  We expanded that plan to include some home-made, home-grown sausages, just for variety.  I think we ended up with about 40 people, and the entire night was a complete success.

We’d raised the real guest of honour, George, since he was a weaner. He was a white breed, but not a large white, and was right around 4 months old when he went to “The Other Farm”.  We were laying bets on what he’d dress out to, based on our first spit-pig, also George, who dressed out to 28kg.  It’s really quite deceptive seeing them alive and then seeing them processed. I was sure this George was a little smaller than the first George, but he ended up dressing out to 29kg! 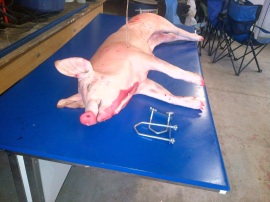 George dressed out to 29kg. I won the bet on how big he’d be. Not that I like to brag.

Scoring, oiling, and salting him turned into a family affair.

We have the spit-pig process down to a fine art now too.  The first one saw us moving the spit a few times, moving the pig up and down on the racks, and having to re-tie it maybe 3 or 4 times.  This time we had to re-tie him once after about an hour, as he’d shrank and his legs were dangling too close to the flames. After we averted that potential disaster, however, he peacefully turned for about another 7 hours without incident. 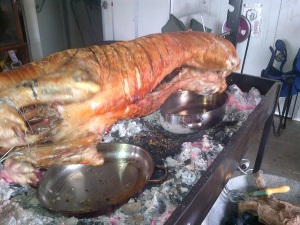 The results were amazing. You don’t have to cut this meat at all, it literally pulls apart with your hands and falls off the bone.  The night was a huge success and everybody loved the porky goodness.