We’d been running The Atherton Farms in an official capacity for at least 6 months before the idea of selling at market occurred to us. In fact, it didn’t occur to us before the opportunity actually presented itself.  Our business model had been to sell in bulk via internet orders.  We didn’t really attend markets ourselves, and didn’t believe that there was a place there for meat.

We were very, very wrong. 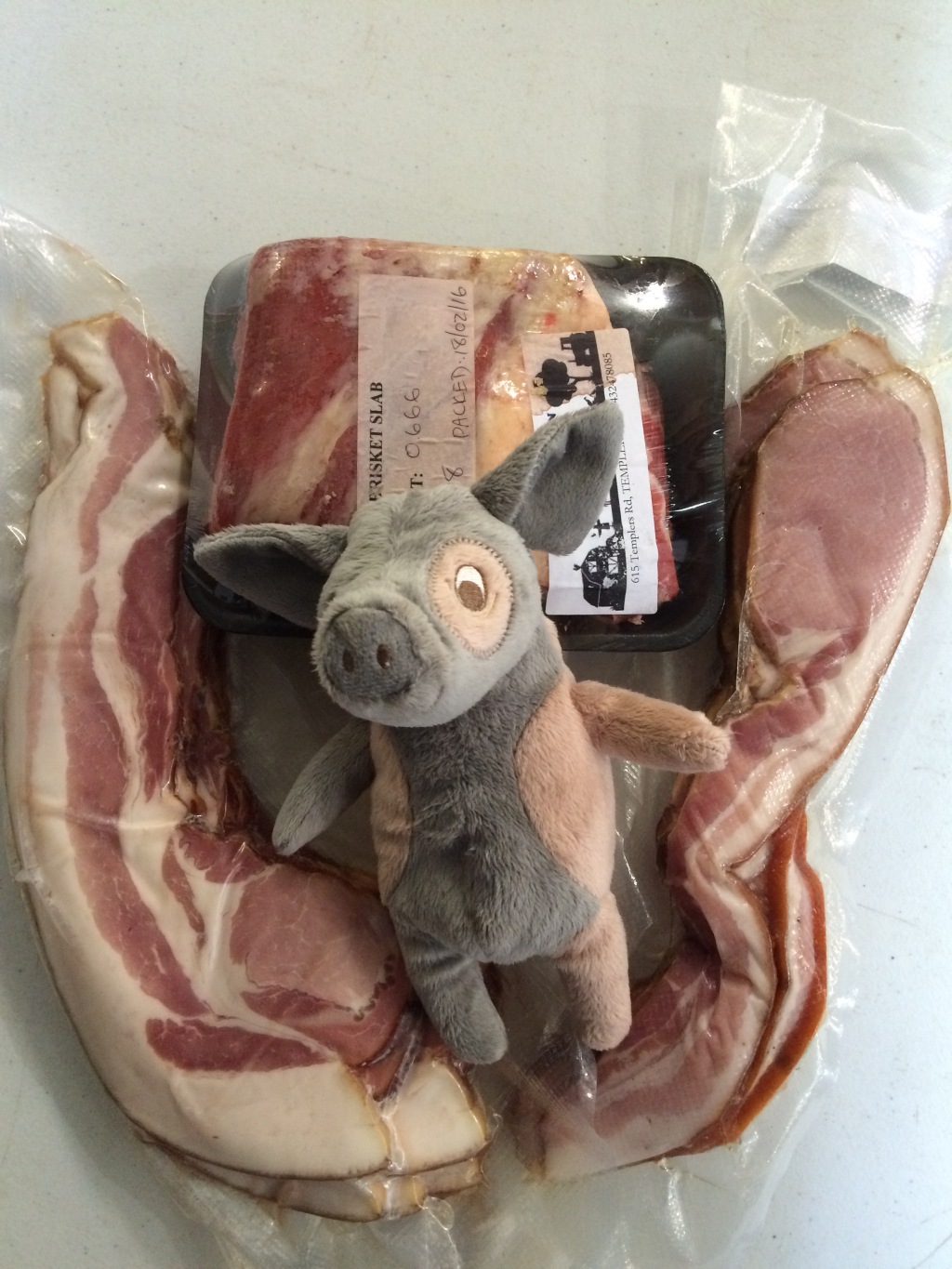 This is Marvin the Market Mascot. A customer bought him for us from interstate. He goes to every market with us, and often features in our social media adverts.

The first market we joined was great, but wasn’t a true farmers market. It was mostly re-sellers, with very few producers. The produce was invariably cheap, often both in price and quality. What we wanted was a market home where we could not just sell our wares but also spread a message of ethically raised meat and sustainable farming practices. We found that demographic at both The Gawler Farmers Markets and its parent market The Adelaide Showground Farmers Market.

The showground market has been voted the best in the country, and was what we were aiming for. The fact that they had been asked to open one in Gawler, quite close to home, was just icing on the market cake.  The market management know what they’re doing, know how to run a market, and know how to engage the public.  I can’t sing their praises enough.

Our first day at Gawler. It’s an entirely outside market, quite small and intimate but a lovely spot and always busy. It’s dog friendly too, which is an added bonus for us. 🙂

Our first Wayville stall outside. It was a great spot, but we asked for an inside slot and were lucky enough to get one inside of a month or so.

Our inside stall. We can set up permanently, which is really helpful, and it’ll be sheltered in winter. Notice the awesome fridge – we scored it from a pizza shop that was closing down in the city. It took a little bit of work to fix up, but that thing is a beast! 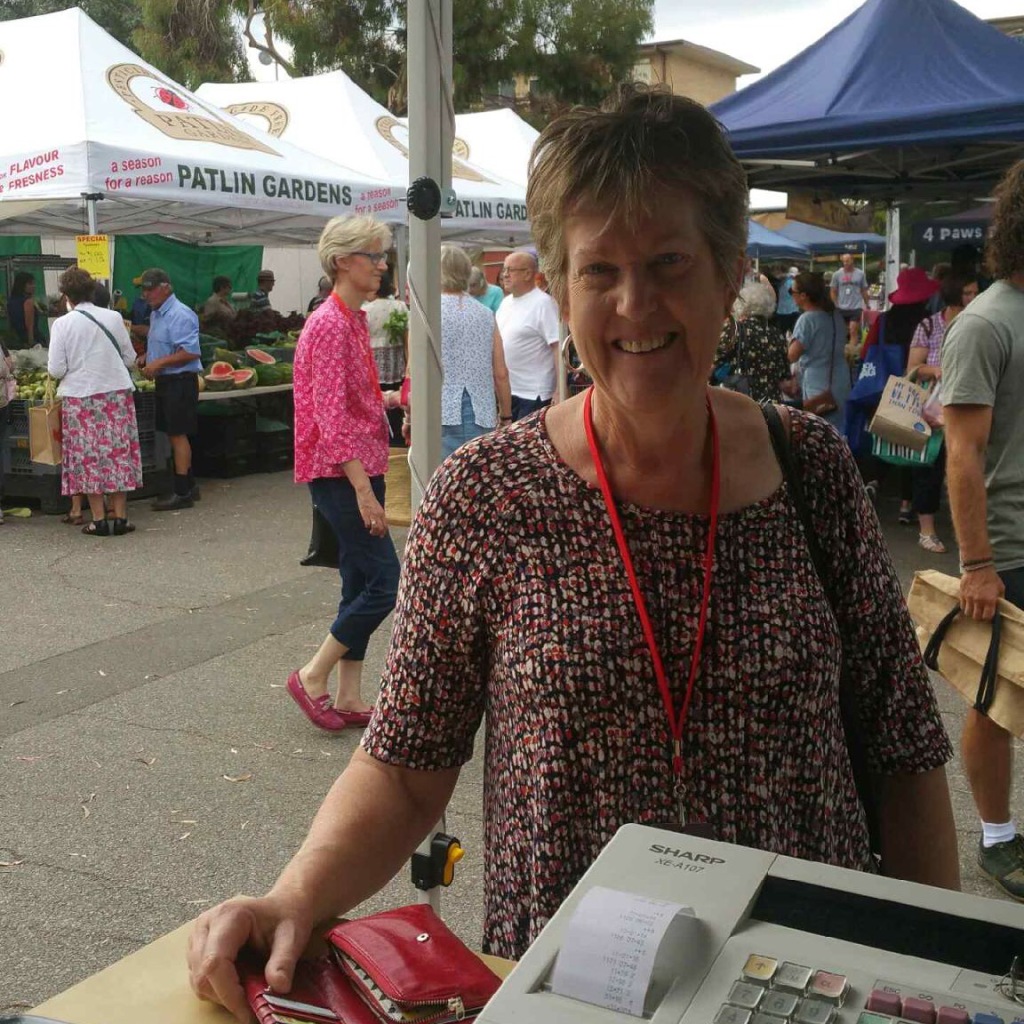 We live in a country dominated by a supermarket duopoly, where clever marketing tells people what they should buy, what they should pay, and even what constitutes quality. People no longer know the provenance of their meat.  They can’t definitively say where their food comes from, how the animal was treated, or what chemicals they’re putting into their bodies as a result.  Farmers markets break that mould. 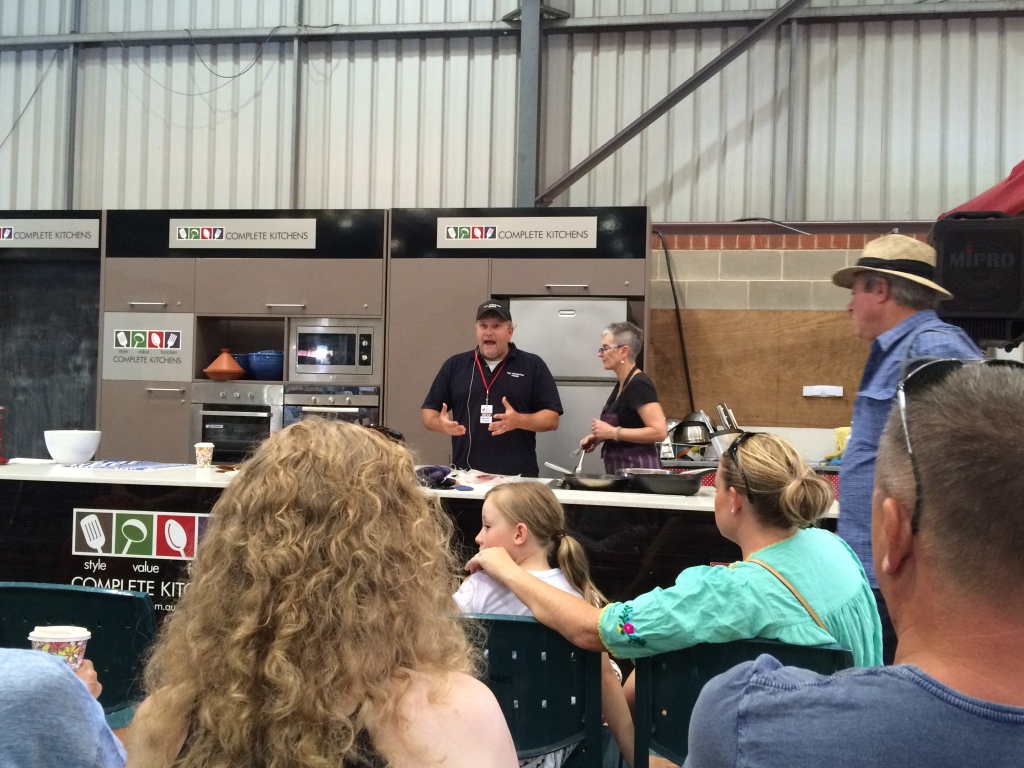 I gave a “cooking demonstration”. That’s in inverted commas because the demonstration involved cooking bacon. There’s nothing complex about that, which made this more a bacon tasting than a demonstration. 🙂

I was in the paper. It was kind of a big deal…

At a farmers market the person selling you the produce is the person who grew it. You can have a conversation with them about how their animals are transported/fed/bred/housed/slaughtered. You can look that person in the eye and build an actual relationship with them. You can’t even do that with butchers now a days, nor have you been able to for years.  The market management at the Gawler/Showground markets go so far as to come out and inspect the farms of the producers before they allow a stall at the market, and this producer guarantee is then hung from the back of each producer market stall. For the first time in a long time, you can be entirely sure of where your meat comes from, and how the animal was treated throughout its entire life.

Apart from growing it yourself, farmers markets are the best way to connect back with your food and be sure of its source and quality.  It’s how it should be.  Don’t take my word for it though. Listen to the guy on this video about The Gawler Farmers Market. 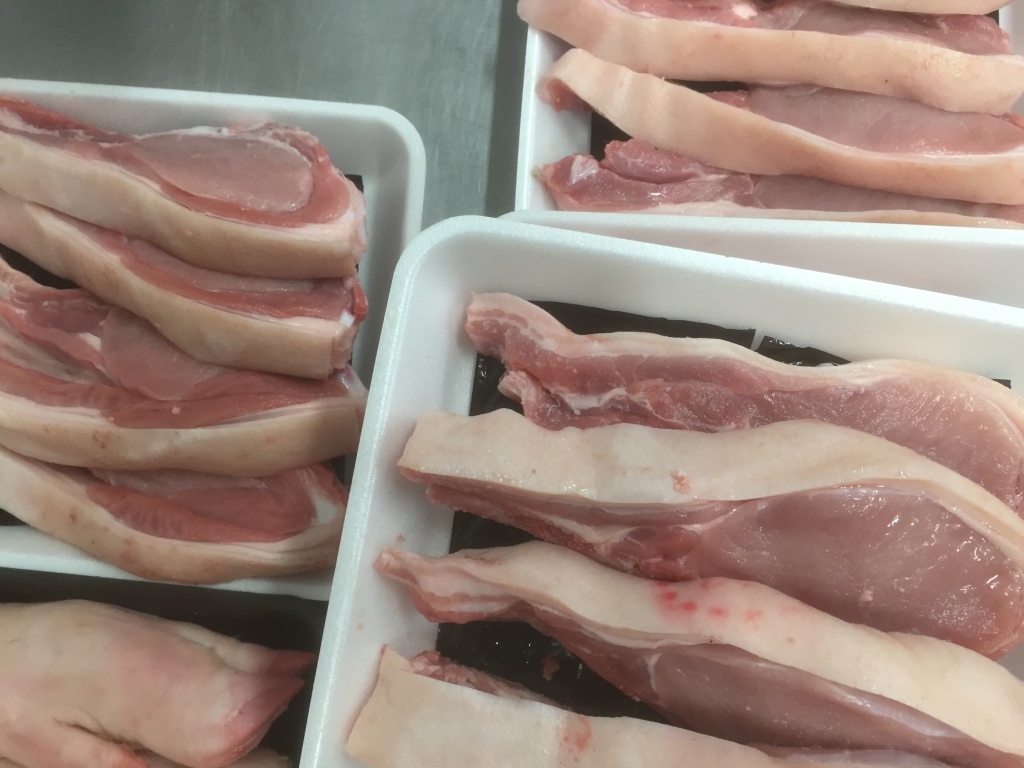 We’ve really gone hard trying to push a whole-animal philosophy. Lamb necks are a bit of a success story along those lines, and we rarely don’t sell them.

We’ve experimented with the best cuts and variations, and about have it right now. That’s boned, rolled, and stuffed lamb shoulder there. Seriously, seriously delicious.

We’ve found that the white pigs slim down quite a bit over summer, while the heritage breeds maintain a nice fat layer. That actually lets us cater to two kinds of people – those after lean meat (aka crazy people) and those who like fat (aka people like me). 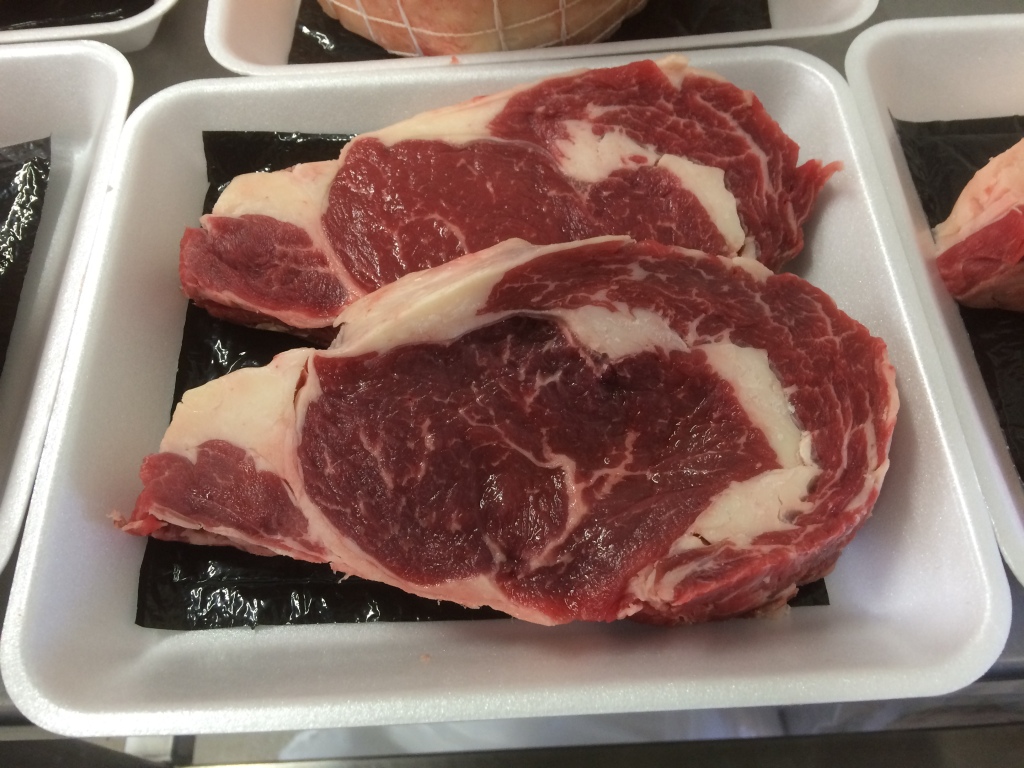 Scotch fillet. I want to bite that raw and eat it like an apple. 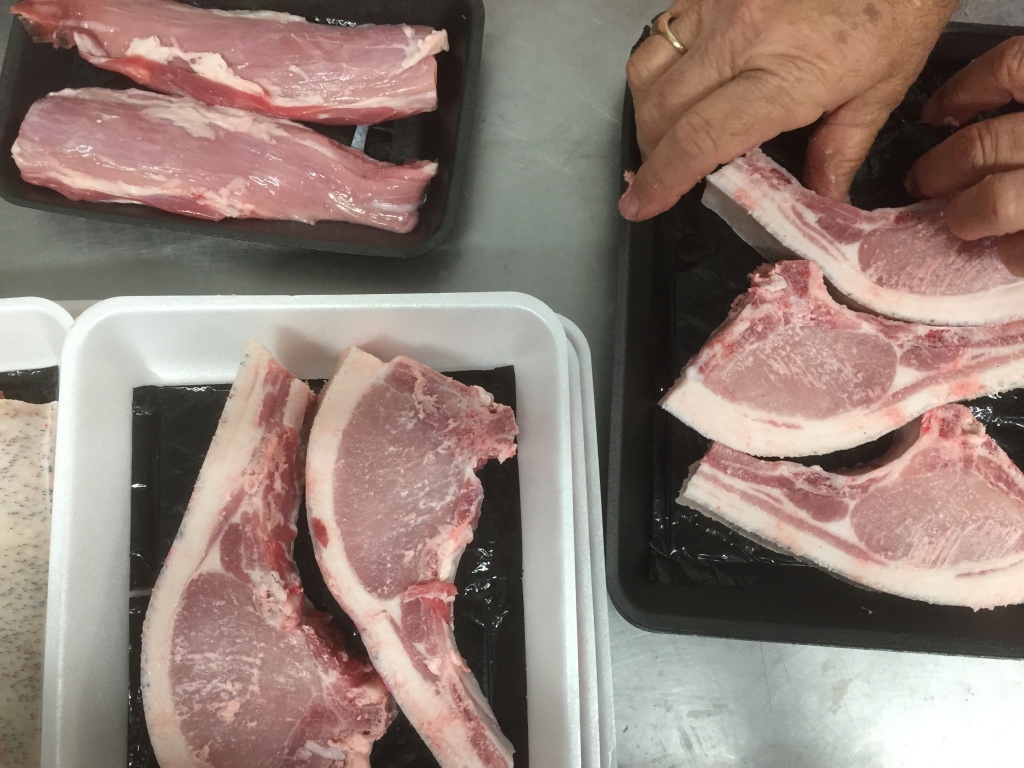 You have to love a good pork chop.