The start of September has Father’s Day, plus Gemma and Linhda’s birthday, which I think is going to make it a bad farm work month.  That sucks a little as the weather is normally perfect and it’s a great time for growing produce. September 2012 was still eventful though…

First off, we had a branch fall off of one of the huge gum trees along the front of the property.  We had hired a cherry picker a couple of months earlier  to thin the big trees a little, and open up the area for an orchard. We’d left as many of the larger limbs as we could, and I’d completely missed the fact that this particular limb was a little rotten.  It had a thick part which was a dead portion overgrown with a live portion.  This was obviously a weak area, and was where it cracked.

We had a few windy days early in the month, but the day the limb fell was completely still.  We were out the back working on one of the veggie patches, and heard a huge crash. It really was very loud, and a little surreal on such a still day. Investigation found the limb had fallen into the orchard area, but apart from bending a little bit of wire on our berry support, it had missed everything and caused no damage. 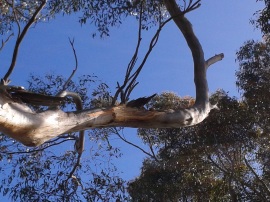 The scar where the limb dropped. 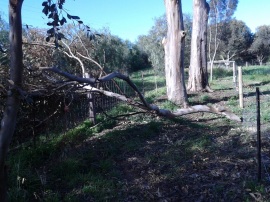 Luckily it missed pretty much everything.

This was actually a good learning experience. We were able to see exactly why it broke, and have identified a limb on one of the other trees that has the same problem. We now know that this limb will also come down, and will probably target it during next year’s tree thinning. In the meantime, we don’t park the tractor under it. 🙂

During September we were able to progress our veggie patches a lot too.  Our first patch in the backyard was coming along nicely, and was pretty much fully planted out. 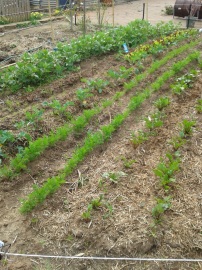 Our first patch is coming along nicely. 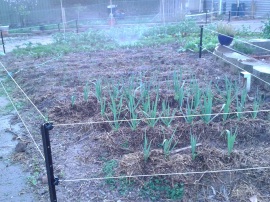 Garlic in the foreground, then onions, beetroot, carrots, and beans.

In addition to this, we worked on the irrigation in The Patch. 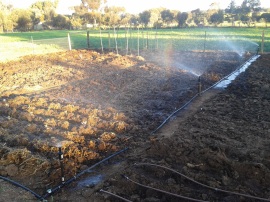 Irrigating The Patch is almost as tough as digging in it. 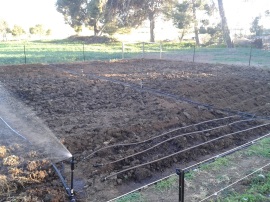 This is the start of the irrigation in the corn bed. There were many, many rows to follow. 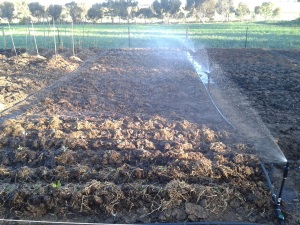 The pop-ups work well, but we found that they’re not great for all beds, and the risers have to be quite tall.

The irrigation in The Patch is very much a work in progress.  I have a fairly specific plan when it comes to the bed rotations and the irrigation of each of them.  Our plan is to make it so the irrigation is easily moved when the bed is rotated.  I planned and replanned this all to the nth degree, and the thing we’ve found is that the plan has to adapt to the reality. 🙂 We’ve already adapted it several times, and it no doubt will be further refined as we go on.

We had a stack of stuff to harvest in September, especially things like radish, cauliflower, and carrot. Linhda called on her Viet recipe repertoire, and we tried some new kinds of pickles. Each of them has turned out great, and we now have a steady supply. 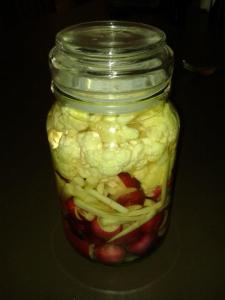 My five-year plan for the farm culminated in pigs and a milking animal. Both of those things seemed to be a whole step up in terms of care, but they’re also an equal step up in terms of self-sufficiency and utility.  We’d been in the place for all of 9 months, and I was starting to think of accelerating our pork/milk plans.  I wasn’t quite ready to take the piggy plunge yet, but started to move in that direction. The first step was sourcing some recycled building materials to set up the infrastructure. We found a winery in Pewsey Vale that had just revamped all of the vineyard posts, and was selling off the old posts for 50 cents each.  They had somewhere between 10,000 and 20,000 to choose from, and Linhda and I spent an interesting date night there picking through what they had.  We ended up with just over 60, and stockpiled them at home in readiness for our pig yards.

The big news for September, however, was bees!  Dad, Linhda, and I were stacking wood under our pepper tree when I looked up and noticed a bee swarm hanging from one of the limbs.  We had spoken about getting a bee hive, but there were more essential things we had to do in terms of self-sufficiency first. Bees were definitely going to happen, but not before fruit, veggies, meat etc. However, here was our chance to not only get bees early, but to get a wild-caught swarm. What could be more self-sufficient than that?!

I quickly did some research on the net, and I called a professional. His advice was to “whack the swarm in a box, go buy a hive, then whack the swarm in the hive”. I’m paraphrasing there, but the parts about “whacking” are word-for-word.  Armed with this detailed advice, a beer carton, and some garden sheers, I set about catching the swarm. 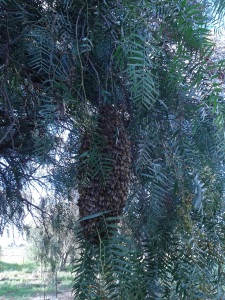 The swarm when we first spotted it – it’s about the size of a football.

I’m really not that fat. It’s the many anti-bee layers…

It all went surprisingly well.  I was wearing more clothes than I’ve ever worn at one time before, which made me look a much larger man.  I don’t think I even came close to getting stung though, and the swarm ended up in the beer carton.

I travelled for work the following day, but a week later the swarm was still there.  They’d chewed a little exit/entrance through the bottom of the beer carton, and maybe a third of it was full of comb.  Linhda and I found possibly the grumpiest apiarist in the state and bought a brand new DIY bee hive.  Dad and I put the hive together, after which I “whacked the swarm into the hive”.

On a side note, I also bought a professional smoker.  The grumpy apiarist explained to me how it works, and I’m positive I followed his instructions exactly. However, it seemed to basically spit fire at the bees, and they weren’t big fans of that.  The smoker may need some further practice…

Either way, by the end of September we had our own wild-caught bees. We have no idea what to do with them, but at least now we have them. 🙂