This month was weird when it came to machinery. We had some pretty big highs, plus a couple of mechanical lows.

I’ll start with the lows. First off, my chainsaw broke. I’d scored it off of eBay at around half the retail price. It was clearly badged as a Stihl, and so I logically assumed it was true-to-brand. Boy was I wrong. I had it serviced and the man, who is an authorised Stihl dealer, told me that it was a “very good Chinese copy”. It worked well, so I was pretty happy with a very good copy.  However, it let me down a couple of times.

Firstly, it kept breaking starter cords.  Turns out it had some poorly machined moving part that was cutting through the cords.

I could live with having to replace the cord though. The big problem was when it broke the crank shaft. That was pretty much the death knell, after which it became spare parts. 😦

Our second mechanical failure was the mulcher. We were using it to mulch up some pine branches when it made a god awful noise and seized up. Turns out that one of the spinning blades snapped and tore holes in the casing. This one was actually quite dangerous. The blade that snapped was probably 100mm long by half that wide, and maybe 5mm thick.  It would have been spinning at a huge rate, and it nearly punched through the casing.  We were able to replace the blade and fix the casing, but I became a little less enthused about mulching all of our trashy branches after that…

While painful, our machinery woes were far outweighed by our mechanical highs.  First off, dad made our 8 x 5 cage trailer into a stock trailer. He welded some square tube to raise the sides, thereby letting us cart sheep and goats etc. 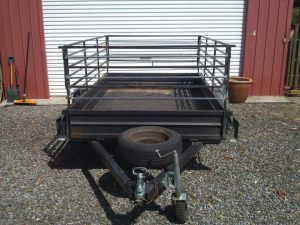 Our cage trailer is now a stock trailer.

Secondly, dad scored a cheap ride-on mower from my aunty. It needed some work, but he got it working and welded a tow bar on the back. It’s all of 15Hp, but will tow a fully laden 6 x 4 trailer with at least a tonne of wood in it. It’s been amazingly helpful, up to an including towing the seeder we used to sow our back paddock.

The biggest of our mechanical wins, hwoever, was our new tractor! It’s a Massey Ferguson TEA20, and is probably somewhere near 50 years old. It was meticulously maintained by a guy who had been a mechanic for most of his 70+ years, and it just gorgeous. It has a power take off (PTO) and three point linkage (3PL), and was even restored and painted in the original colours.  We also got a carry-all, a spray unit, a 3PL-mounted scoop, and a farm trailer.

I was documenting the tractor purchase, not waiting for dad to topple…

The carry-all has obvious applications, but we weren’t at all sure of the rest of it.

As it turns out, everything we scored with the tractor is amazingly helpful. The spray unit can be used as fire fighting equipment, and we’re looking at getting a bigger tanks for it.

I had assumed that the scoop would be pretty much useless to us. However, dad insisted that we spread our GIANT pile of chicken poop with it, and it worked a treat. My plan had been to spend a weekend with a barrow and shovel, but for some reason my brain automatically goes to the manually labour intensive solution. Either way, the scoop ended up being a freaking god-send.

3PL scoop on the tractor. So, so, so freaking useful!

I think the biggest win, and ironically the thing we almost left behind, was the farm trailer. It’s a little 6 x 4 trailer that has been beaten to hell, but we use it all the time. My car, the tractor, or the ride-on can tow it, and I can’t even guess how many tonnes it’s carried for us.

Farm trailer with at least a tonne of wood.

In addition to being a month of machine madness, we also thinned some more trees. This included felling one of the big pines out the back. We have a line of 7 or 8 big pine trees in our back paddock, between us and our neighbour Farmer John.  A couple of them are really quite pretty.  The rest, however, are horrid.  One has already dropped a limb on Farmer John’s shed. That was before we moved in, and in typical country style he just rebuilt the shed and didn’t complain.  There are others that are just as dangerous though, and the one we took down was literally leaning to the point where it was double over and touching the ground.  It wasn’t anywhere near the largest out there, but gave us a heap of wood. 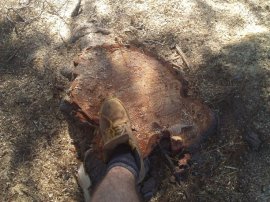 Stump of the leany pine we felled.

Wood from the felled pine.

The thing I love about cleaning up all of this wood is that I get to use my axes. Just quietly, I have an axe thing, and find they are the best therapy/work-out you could ask for. Nothing will release stress as well as spending a couple of hours beating the shit out of things with an axe.

I love me some axes!

We also finished up the fence around the meat bird/citrus area. This included tearing down the dodgy fence that was around the rainwater tanks, and cleaning up the accumulated piled crap. This included dirt piled against the fence, which had of course rotted the wood and become a pathway for white ants.

Pulling down the crappy fence around the water tanks.

This month saw some new additions to our feather/fur family also.  Linhda bought three new egg birds off of Gumtree.  She picked them up from a place only 10 minutes from us. They are apparently Plymouth crosses, though I’m sure one is a Maran.

The new chickens are quite pretty, not to mention large. The weird thing about them is that their eggs are quite small. Our Isa Browns are significantly smaller, but lay eggs more consistently and also that are much larger.  In fact, one of the new ones has never laid an egg. I think I’ve narrowed it down to the Maran (the black one).  The two huge white ones lay quite small white eggs.

Lastly, and most importantly, we got a new dog! Her name is Tatyl and she was Peyton’s early 18th birthday present. We saved her from the pound and she’s a kelpie cross. To be honest, we were aiming for a lap dog, but she turned out to be quite tall and lanky. She looks like a bit like a large fox or coyote in profile. Her kelpie instincts have also made her… problematic with the poultry.  She’s gorgeous though, and firmly part of the family.

The cool thing about Tatyl is that she has the same markings and coat type as Domino. She looks like the product of a kelpie getting over the fence and into Domino.

Finally, this was the month that we found out how painful goats can be with fences. We had been expecting pain with them trying to get out, but we’ve never had one escape. Rather, they like to stick their heads through the sheep panel, after which their horns stop them getting out. The really frustrating thing is that they’ll be in a paddock FULL of feed, but stick their head through to nibble some dry gum leaf, get stuck, and then scream at you to come get them out.  We worked a way around this, but it didn’t happen in March… 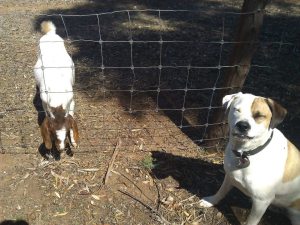 Bruce laughing at the stuck goat.