June was ALL about the fruit, veggies, and our first crop!

We planted out our crop early in the month. In reality, I think we’d normally aim to have the paddock ploughed and planted a month or so earlier. The rule-of-thumb is that you plough after the first big rain, which tends to be around Anzac Day (end of April). We were constrained by the fact that we had neither plough nor seeder, which just shows how forgiving this particular rule-of-thumb is.

We planted wheat, mostly because that’s what we could easily get from Farmer John.  The estimated 2 acres took about 50 or 60kg. In reality, that’s fairly heavily sown, but I think we’ll go even heavier next time.

I got a little seeder from the John Deere dealership down the road, and the ride on towed it perfectly. It has a manual release for the seed, so something bigger like the tractor would never work.

Our little seeder. Our farmer neighbour laughed a little…

The big lesson learned was to run the seeder up and down the ploughed furrows, and not across them. I about bounced myself off of the ride-on countless times, and it shook the poor seeder around.

The crop is up!

We also revamped the large veggie bed out in the back garden.  Most everything was ready to come up, so we harvested what was left, spent some time grubbing out the last of the stubborn trunks from the ornamentals we’d torn out, and rotary hoed it. Lastly, we dog-proofed it. Our dogs are pretty good, but three of them together tend to be bat crap crazy, and their running around had them tracking through the veggies. To get around this we put a small electric fence around the large bed.

I was trying to test the electric fence with Bruce. He was not fooled. 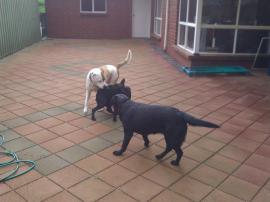 Tatyl was the first dog hit by the electric fence. She was not happy.

When the painful prep was done, we planted out: 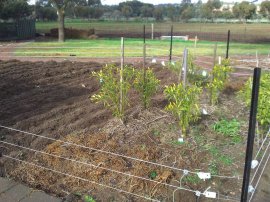 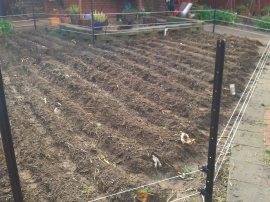 You could almost hear the seeds germinating…

We bought all of our fruit trees in June, though some were bought near the end and not planted out until July.  We got them in three lots, mainly because we visited three different nurseries and kept finding trees we’d not seen elsewhere.  We ended up with:

I prefer to plant fruit trees at this time of year. You get them bare-rooted and they’re pretty much dormant. There’s less shock when you transplant them, and they have a good couple of seasons to establish before the really hot weather. They tend to be cheaper too.

We had our normal weekend fill-in project of tree trimming, which included removing some scrubby, half-dead gums.  It was a little bigger this month, as a couple were up on a higher area where the retaining wall had been built from non-treated timber. It was well built, but the wrong materials meant it was rotten and full of white ants.  We ended up pulling some of it down on accident when we were pulling some trees out, and so then we pulled some more of it down on purpose.  We plan on knocking the corner off the bank and making a more gentle slope that really doesn’t need to be retained.

Tearing down half-dead trees and a rotten wall. Farm efficiency!

The best use for the old retaining wall.

Lastly, we took our last two lambs and some chickens to “the other farm”. These were lambs 3 and 4, and we were old hands at it now. We did change out the cuts of meat we were getting a little, just to find what best suited us.  It took 4 lambs and 2 goats before we really got that right.

The chickens were interesting.  We’d free-ranged them over our orchard area, which means they got a ton of exercise. There was a heap of green feed, as you’d expect for that time of year, so I’d not supplemented their feed as much. The result was big birds, which were super tasty but a little tough. I think a combination of too much exercise and a lean diet made them tough.  This was an awesome learning experience for us, as it allowed us to fine tune how we keep the birds.

I swear they’re half chook and half dinosaur.