September was pretty much ALL about pigs!

It was Linhda and Gemma’s birthday on the 8th, and we had planned a pig-on-a-spit for the weekend of the 14th.  We knew that Smoked Pig was due to drop right around their birthday. We’d done the math, and assuming she’d gotten pregnant pretty much as soon as Boris was put in with them, she’d be dropping the week of the 9th.

At the same time, we knew that Honey Pig was pregnant, but guessed she was a month or so behind Smoked because she was so much smaller. The month before  I’d begun to suspect they might be due around the same time, judging by their teat development (the vet explained that to me), but we still weren’t sure.

We had Smoked set up in the vet-approved farrowing shed, but Honey was in the less salubrious stock crate in the pen next door.  Our plan was to have Smoked drop, wean her babies over the following month, move them out, and then have Honey move in.  Boy were we naïve.

We were in QLD visiting my brother the weekend of the 7th and 8th, and I was just glad no piglets had appeared before we got home the morning of the 9th.  I went out early on the morning of Tuesday the 10th and started my normal routine.  I was walking through the larger poultry run, and looked in on Honey to see how she was. It took me a minute to work out that the little, spindly-legged things wobbling around her prone form were piglets.  I quickly checked Smoked and saw she had piglets too.  They’d both dropped on the same night!

6 piglets, 14 teats, and they still end up fighting…

It’s hard to believe they were so little, even only a month on. 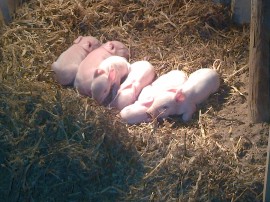 Snug under their heat lamp. 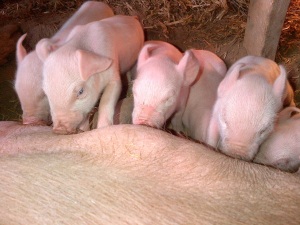 Yes, I had to lean on a quarter-tonne of nursing mother to take this picture

Smoked had 8, but lost 2, while Honey had 10, but lost 1.  We’re not sure if they lay on them or they were still-births.  I checked the little bodies over when I took them from the runs, and they were significantly larger than the others. Smoked also had some blood spray a good 2 feet up the wall in her farrowing shed, and so may have had a bad time of it.  Still, they both did it all on their own, and we ended up with 15 piglets on their first try.  Pigs are freaking awesome!!!!!

This put us in a bit of a quandary though.  The nights were cold, and we weren’t sure how the mums would go trying to share the farrowing shed. Pigs are protective mums, and the two sows may not mix well. I was super-worried about Honey’s babies that first night, and mulled over how to fix up the stock crate while trying to sleep. I came up with an idea in the early hours of the morning, and rushed out right at dawn to implement it.

I used some recycled beams and tube we have to run through the stock crate and give the babies a place to get away from mum.  The stuff I’ve read about this calls them “creep” areas, or “creep boxes”.  I have no idea why.

The babies would still be cold though, more so being away from mum. With that in mind, I called past a pet store and grabbed another heat reptile heat lamp. I used an old wooden crate as a creep box, set up the heat lamp so it shone straight in, and the babies loved it!

Setting up the babies with some warmth.

Yeah, they were pretty happy with that.

This is what happens when you let your daughters loose on the piglets. Lots of squealing. The piglets made some noise too.

I modified that set up a few times, and used a bigger crate in the end to give the growing babies more room.  We’ll get another proper, larger, farrowing shed before we have more babies, but this set up really helped in the meantime. 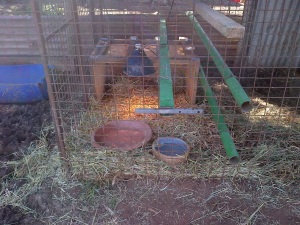 Take two. This has pretty much been our set up since.

We took both George and Prosciutto to “The Other Farm” in preparation for the birthday party. We really didn’t need to get Prosciutto done for the party, as George was always going to be big enough. However, she was around 12 months old, and needed to go. It only made sense to take them both at the same time.

Prosciutto dressed out to 93kg!!!! She was a smaller white breed, and I’d guess our large whites would dress out to twice that at the same age. Still, 93kg of pork is a lot to contend with.  Our plan was to make bacon out of pretty much everything from the back to front legs, and mince the rest of sausages.  However, I did cut some chops after somebody sent me a link explaining how best to do that, and we kept the back legs as roasts.  We cut those legs in half, and each roast is still well over 4kg.  In hindsight, we don’t need roasts that big… J

This is half of Prosciutto boned out and ready to be made into bacon and sausages.

I tried my hand at some chops. In hindsight, they were a little thick.

I don’t mind the odd snag off of a BBQ, but otherwise wouldn’t give you five cents for a sausage normally. Our home-made pork sausages, on the other hand, are freaking amazing!  Gemma got involved with this lot, which was cool, and together we pumped out around 20kg of sausages.

Gemma getting her hands dirty. Literally. 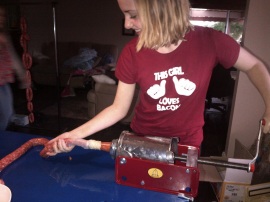 The shirt says it all really.

That’s a lot of sausages!

The bacon was our biggest win here I think.  I’d found a guy at MBL who was a bit of an expert and I picked his brain. I even went back the next day to talk to him again. Finding that kind of person in South Australia was gold to us, as much of what we’d been learning came from people in the UK, or colder Aussie climates like Canberra or Tasmania. The method this guy gave us was:

The differences here when compared to our first try was the very measured amount of salt, and only getting the internal temperature to 50 degrees.  We went to 70 degrees last time, which meant you could eat it “raw”, but our guru told us that was way too hot.

The only thing we did differently was use a bit more salt.  We measured out 24g/kg and it just wasn’t enough to cover the meat.  That may be because I did it in smaller slabs – 1 or 2 kg.  That gave more surface area when compared to one big slab, and so needed more salt to cover it.

I did it in smaller slabs so they’d be ready quicker.  We were able to do about 30kg of bacon in the one weekend – the smaller slabs cured for one day, while the larger went for two.  That meant we could smoke it all in two batches. 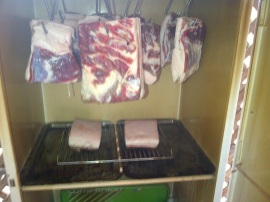 Smoking our first batch of bacon.

The results were amazing! Seriously, the best bacon I’ve ever tried.  Our challenge now is to make that bacon last until we can get another baconer fed up, which will take maybe 9 months.

The MBL man said you don’t have to freeze it. If it’s cured corrected and Vac Pac’d, it’ll keep in the fridge for months. While I trust him, I still froze ours. I’ll keep it in the fridge for a while (not that it lasts in this house) once it’s opened, but any longer-term storage will be the freezer for us.

We also had to do a bit of impromptu vet work on one of the babies.  He had an abscess on his hind quarter.  I’m guessing that a spider bit him.  We kept an eye on it for a few days, but it wasn’t going down.  I grabbed him, took him to the shed away from the mums, iodined his butt, and used a syringe to draw out the fluid.  It was gross and yet awesome! 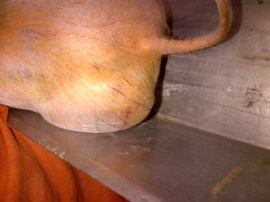 The before picture of the abscess.

And unhappy piglet and me covered in blood and abscess juice. Good times.

I wanted to tidy up the pig runs a little. Pigs seem to have a scorched-earth policy when it comes to how they live, and the runs can get a bit muddy. Then, when the sun comes out, they end up bumpy and horrible.  We had a few spare half-tonne rolls of hay from last season, and used two of them to deep litter the runs. It worked really well, and makes the yards a bit nicer for the piglets to run around in.

The straw makes the yards a little nicer.

Chooks free-ranged into the pig runs. They are either very brave or very stupid, and by that, I mean they’re very stupid.

We had a small poultry win too.  After losing our ducklings last month, we had 4 hatch this month. One didn’t make it, but 3 powered through.  After the problems with the owl chowing down on our babies, I didn’t want to take any chances and so moved them into the heat-box we use for day old chickens.

We did some stuff in the veggie stuff too, but let’s face it, it’s all secondary to the piglets. 🙂

The spuds are coming up nicely.

The babies love their greens!

They do love a scratch. Sometimes they bliss out so hard they fall over.