Our first white x heritage breed litter was born in January. This entire experience, covering both litters, has been fascinating and a HUGE learning experience.

First of all, the two Large Black x Berkshire girls, from the same litter, look like they’re different breeds, the Large Black-looking girl (Miss Swan) being much larger than the Berkshire-looking girl (Socks).

Secondly, we had them in with the boar at the same time, and then long enough to cover a few consecutive seasons. We saw them couple on the first day, but not again after that, and had assumed they’d be due around the same day. However, by the time that Miss Swan dropped, Socks was clearly a ways off.

Thirdly, we were expecting them to have relatively small litters, and that happened when Miss Swan had a total of 5 in her first litter. With Socks being much smaller and barely looking pregnant, I was guessing she’d have 4.

Lastly, this was an interesting contrast between the white and black girls in general. We can tell when the white girls are getting close as their bellies drop and their teats fill up like water balloons. However, the black girls, who don’t produce as much milk, have much more subtle changes.

So where we thought that Socks would drop at the end of January and have 4 or so babies, she dropped 11 in the middle of February! The much, much smaller sow had more than twice the number of babies. There was one still-born, which was a boy who was almost twice the size of his litter mates. I suspect she struggled and he didn’t make it. She also squashed one during the first 24 hours, which is to be expected when you have that many. Still, it looks like she’ll wean 9, which is amazing for her breed and the first litter.

Only a few hours old. 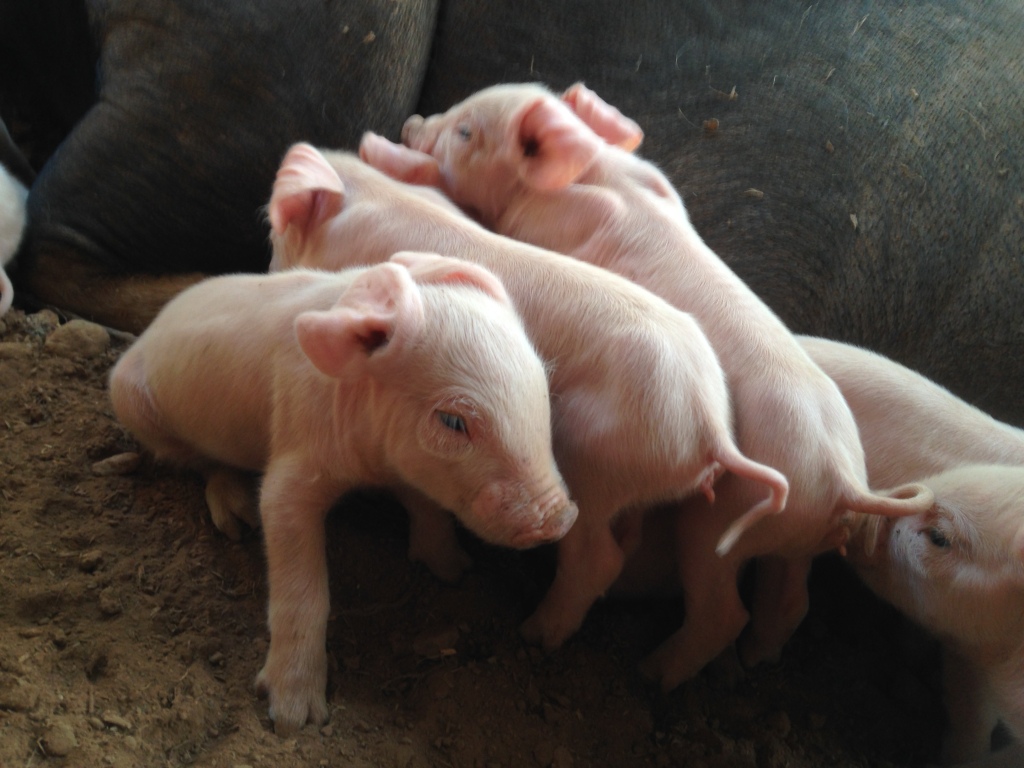 Inside a few hours they’re up and about. The trick is containing the little buggers.

I’d noted with Miss Swan’s babies that they were white with black marks/patches/spots, but all of Sock’s babies were born almost entirely white. However, we’ve seen that Miss Swan’s little boy, who was born mostly white, has been colouring up in the last couple of weeks. It’ll be interesting to see if this new litter will change colour at all. It probably doesn’t matter, but it’ll be easier to tell between the breeds if they at least look different. 🙂

The big test will be in the quality of the pork. Both mums look like they’re different breeds, and both had completely different kinds of litters. Logic says that the pork may vary quite a bit, but we’ll have to wait and see.